Time on the trail: ~3 hours

Wildlife spotted: too many mosquitoes and chipmunks to count, 2 black flies, one frog, one garter snake, a handful of turkey vultures circling the peak; heard three woodpeckers and calls from some yellow warblers (tweet-tweet-alittletoosweet) and ovenbirds (teacher-teacher-teacher!) 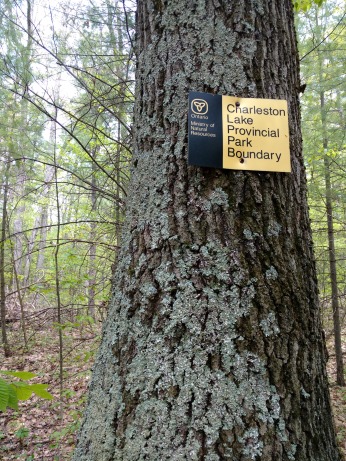 This May long weekend, I decided to try out a new trail each day. My first excursion took me into Charleston Lake Provincial Park, along the Blue Mountain trail. This trail can be accessed by road at the intersection of Blue Mountain Rd. and Warburton Rd. in the United Counties of Leeds and Grenville, ON. It can also be accessed by water via Huckleberry Hollow in Charleston Lake PP, which would be a whole other adventure. The nice part about the road access is that you can park and enter the trail system without paying any fees.

I went into town in the morning to run some errands, and so ended up getting a late start on the trail around 1pm. The first bit of the trail runs down a country road alongside farm fields, but soon enters a lovely forested area. This first section of the trail runs on private land, but you soon cross the boundary of Charleston Lake PP. The majority of the trail runs through a beautiful forest, mainly deciduous with some scattered white pines and other conifers. There are several boardwalks and bridges crossing over small creeks. Near the beginning of the trail, you get a view of a gorgeous wetland area. There are also several large glacial erratics (large rocks left behind by glaciers) scattered throughout the forest, as well as some nice rock walls. There were several cars parked at the road access area, but the trail was by no means crowded. I crossed paths with 6 or 7 other hiking groups during my trek, but was alone for most of the trail. 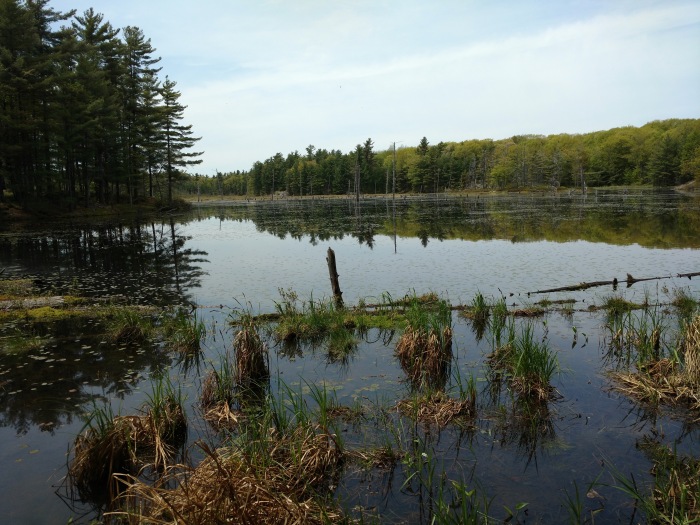 I would classify this trail as moderately difficult. The trail is consistently covered with roots and rocks, and there was a fair bit of scrambling up and down some relatively rough terrain. However, there was nothing too intense, and this trail is probably accessible to anyone in moderately good shape. The trail was muddy at some points, and the mosquitoes were fairly bad in some spots (though not unbearable).

The trail is very well-marked, with trail markers in a nice, bright blue. But don’t trail daydream too much, or you may find yourself wandering off course! I had one brief yet scary moment where I thought I was walking on the trail, but then realized: 1) the ‘trail’ had stopped looking very trail-like, and 2) I couldn’t see a ‘little blue man’ anywhere around me. Luckily, I only had to backtrack a short way before I found the real trail again.

The view from the ‘peak’ of the ‘mountain’ is absolutely gorgeous, and well-worth the hike! I stopped briefly at the top to sit and eat a trail lunch of tortillas with peanut butter, an apple, and a cheese string. During my break, I met a dog named Theo who had strayed away from his humans to check out my lunch. 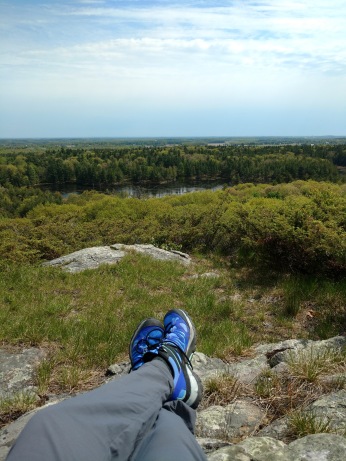 This hike was my first time really trying out some of my gear. I stuffed my pack (the Gossamer Gear Mariposa 60) with a bunch of gear, some necessary for the day hike, some just for extra weight. I don’t have access to any kind of scale right now, so unfortunately I have no idea how much it really weighed, but it was certainly lighter than it will be on any of my real trips. That being said, the pack was wonderful! I barely noticed that it was on my back. My trekking poles (Fizan Compacts) were also a hit. It was my first time using trekking poles on a hike, and while I did feel a bit awkward with them at first, I very quickly hit a natural stride, and now I don’t know if I’ll ever go back! Trekking poles are great for taking a bit of the strain of hiking off of your legs and back, by getting you to engage and put some of the work into your arms. They are particularly helpful when hiking with a heavy pack, and when navigating trickier terrain.

There was a moment near the end of the trail where I asked myself: “could I do this for ~10 hours every day for 5 whole months?”, and my heart screamed YES! But let’s up the miles and pack weight a bit before making any judgement calls.

Trail lesson of the day: Stop and smell the nature. There were a few moments on the trail where I found myself super concentrated on just getting the miles in, to the point where I wasn’t noticing any of the beautiful scenery around me. I had forgotten why I was doing this in the first place: to fully experience the glory of mother nature. And, don’t try to use trekking poles on boardwalks. They will get stuck in the cracks.