Day 2 of the long-weekend-hiking-extravaganza took me down a short stretch of the Rideau Trail. I hiked a 4-mile section from Trailhead Place to Cataraqui Cemetery (and back), but the entire trail spans 387km and runs from Kingston to Ottawa.

I parked in the nice, big (free!) parking lot just off of Trailhead Place at King St. W in Kingston, ON. There were a few other cars in the lot, but it was mostly empty, and I again spent most of my time on the trail alone. Right off the bat, the trail enters a lovely forested area, with a golf course on one side and some scattered wetland areas on the other. The trail was easy walking for the most part, and this section would probably be accessible to most people. The path was nice and flat, with not much in the way of roots or rocks. 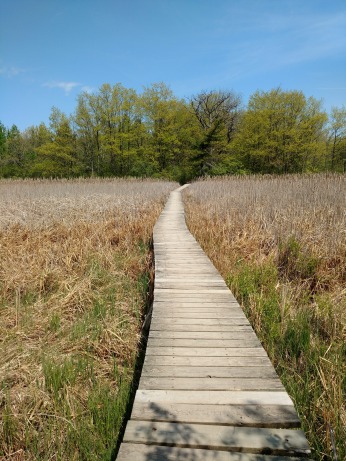 The spring weather was lovely, but beware of sparse spring vegetation when trying to trail pee!

About a kilometre from the parking area, the trail briefly turns into a boardwalk through a wetland full of cattails. There is another boardwalk a little later on, and the trail crosses over a set of railway tracks a couple of times. After another kilometre, the trail spits you out onto the streets of Kingston. There was about 600m of road walking, before the trail entered another area made up of meadow and forest. This section was fairly short, and was followed by a sizeable chunk of urban trekking to Cataraqui Cemetery. At the 5km mark, the trail even went right through the Kingston VIA Rail station! The trail is wonderfully well-marked (even in the urban sections), with bright orange triangles that make it almost impossible to get lost if you’re paying attention.

I have to admit, the urban trekking was not the most enjoyable hiking experience. But, just as I was starting to get really sick of it, I came around the corner into Cataraqui Cemetery, and was greeted by the lovely scent of a row of lilac bushes. We have two huge lilac bushes in our backyard, so their smell always reminds me of home. The cemetery was actually quite nice, and I soon discovered that it was the home of Sir John A. Macdonald’s (the first Prime Minister of Canada) burial place! In fact, the mid-point/turn-around of my hike ended up almost exactly at the spot where he was buried, which I thought was pretty cool. I sat under a tree for a few minutes and ate my trail lunch, before turning around and heading back. The second half of the hike was pretty uneventful, and I was very glad to get back to the part of the trail that was actually, you know, a trail.

This hike was definitely a lot harder for me than yesterday’s. It was a bit longer, my pack was a bit heavier (I still don’t know how much it weighed… but it was enough for my car to think there was someone not wearing their seatbelt in the passenger seat!), and the trail took me through some less-than-nice scenery. However, I am still really looking forward to returning to the Rideau Trail, next time on a more northerly stretch that will take me out of the city.

Trail lesson of the day: Push through the sucky moments. There might be something lovely waiting around the corner.