Finger crossing must really work, because I slept sooo much better last night. (I mean, it was either the finger crossing or the hiking 22 miles on a small amount of sleep…). I fell asleep quickly around 9pm and slept soundly for an hour and a half, then awoke overheating in my sleeping bag. I tossed and turned for maybe around half an hour and then fell back into a deep sleep. I woke next at 3AM, to a strange sound across the lake that I quickly convinced myself was a bear walking through the woods. It sounded like many sticks breaking, which I assumed MUST mean something was walking around over there. I lay in my sleeping bag with my heart in my throat, praying the sound wouldn’t come any closer. After a few minutes, the sound started seeming too repetitive and rhythmic to be sticks breaking under footsteps, not to mention the fact that it remained almost totally stationary. Suddenly, realization hit me. It was nothing more than a couple of persistent mink frogs, calling into the night (their call sounds similar to chopping wood, hence the ‘sticks breaking’ stream of thought). After this epiphany, I fell asleep again quickly, feeling rather silly as I had actually noted the chorus of mink frogs calling earlier in the evening (it’s a cool frog call that I hadn’t heard in person before). 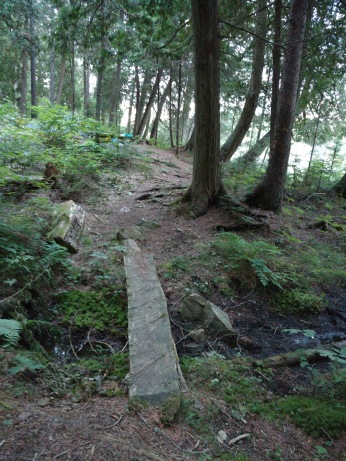 Early morning light on Susan Lake, and my own personal log crossing to get to camp!

When I next woke, it was shortly before 6AM, and I was warm and cozy in my sleeping bag as dim light filtered through the tent walls. It was still early, and since I had a short day of hiking ahead of me, I remained nestled in the warmth of my sleeping bag for a while longer. It was hunger that eventually persuaded me to get dressed and leave the tent. I got the food bag down and began preparations for my favourite camp breakfast (also my favourite breakfast at home): oatmeal. I enjoyed my warm coffee and oatmeal on the log bench as the sun’s ray struggled to reach the surface of Susan Lake. The sky looked fairly overcast, and I worried it would be another gloomy day of hiking. I really liked my site on Susan Lake, and I can’t put my finger on the reason. The lake view from the site was certainly nothing spectacular, but there was just something that felt nice about the site. However, as I was going through the last motions of packing up camp, there were angry animal noises from the corner of the lake. I told myself it was just raccoons (and I am pretty sure it really was), but I was suddenly very ready to move on.

Cool sites along the trail

I was on trail by 7:15 AM, and was anticipating seeing many more hikers as the trail approached the parking area, but it was a surprisingly quiet morning on the trail. Right off the bat, there was another large climb to a “lookout”. The lookout provided nothing in terms of a view, but once again provided a small pocket of cell service. It also certainly served to get my body warmed up and ready for the day. I passed Redwing Lake, which has three labelled sites on the map. I only saw one, and it was occupied by a still-sleeping inhabitant. The next lake was Lupus Lake, where the trail passed right through a campsite where two guys were enjoying some morning coffee. We wished each other a good morning as I passed by. I was really loving the hiking this morning. The overcast sky had opened up and the sun was shining through the trees. The forest was illuminated with shafts of yellow sunlight, and the air was cool and smelled delightfully fresh. I really do love early morning hiking, but for one small thing: the f*cking mosquitoes!! They were really terrible again this morning, and no amount of DEET could protect my body from becoming one giant, itchy lump. 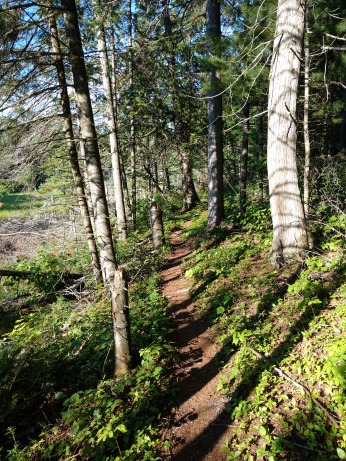 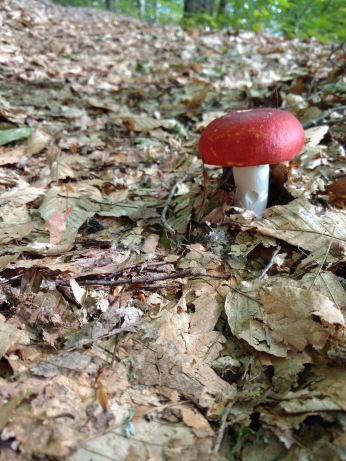 Despite the insects, the morning was highly enjoyable. Soon, I was back on the first loop! I walked around a corner and was greeted by the site of Ramona Lake, which had a glorious warm breeze blowing off (mainly glorious because it briefly blew away the mosquitoes). I walked slowly through the forest, trying to soak up every last bit of it, really taking the concept of forest bathing (aka shinrin-yoku) to heart. I eventually reached the last lake of the trail, Guskewau Lake. My legs were starting to feel quite tired, so after crossing Guskewau Creek, I plopped right down in the trail for a short break, with a lovely view of the lake. As I was sitting there, a family of three emerged from the closest campsite. “Hello!” I greeted them. “Out for a solo?” asked the man. “Yep!” I replied. “Oh, good for you,” he said, smiling. We chatted for a bit about the La Cloche trail in Killarney, which they had done and I will be doing soon before they moved on. I was also ready to move on, so I got up, put my pack back on, and started out on the last 4 km stretch of the trail. 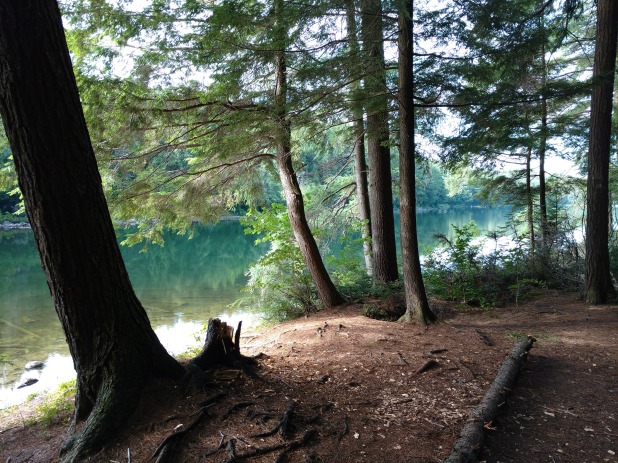 After just a couple minutes of hiking, two dogs suddenly rushed up behind me, barking loudly. They must have been called back by their owners, as they then turned around and ran back in the other direction. This continued for a while, as the one dog repeatedly ran up behind me, then turned tail and ran back towards its group. It was pretty funny. Eventually, I stopped for a drink and a group of 5 people and the 2 dogs passed me. A bit later, another group of 4 passed me. I was moving pretty slowly, as my legs were tired and I really did want to enjoy every last minute I could squeeze out of the lovely hiking. This may have been my favourite day of hiking in the trip. I didn’t feel at all anxious or lonely at any point, and everything was just beautiful. 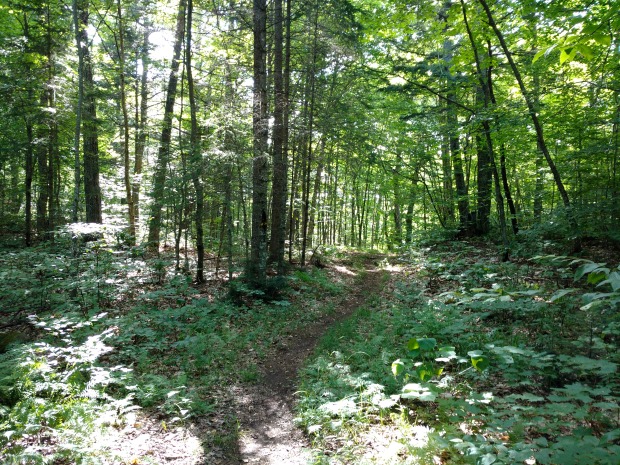 Soaking up the forest light

Eventually, I rounded a corner to see the bridge over the Oxtongue River that led back to the parking lot. I had finished. The group with the dogs seemed to be finishing at right around the same time, so I got one of them to take a photo of me with the trailhead sign. We got to chatting about each of our trips, and they were very impressed that I had completed the entire third loop in just 2 nights. I keep forgetting that a lot of hikers aren’t used to people doing 20-30 km days, and it was really nice to talk to them about how their trip had gone as well. I got into my car and started the drive through the park, feeling quite elated. I stopped and waited half an hour in line for ice cream at the park store, then headed home. 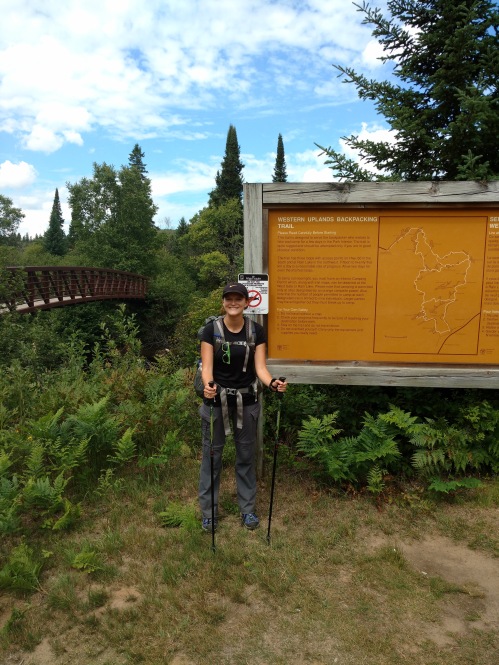 Trail lesson of the day: “You’re braver than you believe, stronger than you seem, and smarter than you think.” – Christopher Robin, Pooh’s Grand Adventure

2 thoughts on “Western Uplands Trail Day 3: A Morning of Shinrin-yoku”