Classic starting photo at the trailhead!

Today I had just a short 7 km hike to my first campsite, so I had a leisurely start to the morning, leaving my parents house just after 10am with a 3.5 hour drive to the park (including a Timmies stop).

I arrived at the park just after 1pm, and quickly obtained my permit from the main campground office. I parked in the campground lot closest to the west trail head (there’s no official parking lot for the trail), and began my hike.

View of George Lake from the start of the trail
I ran into my first hiking group just a couple of minutes into the trail. “Thru hiker?” one of them asked me. “Huh?!” I replied, immediately taken aback by the thought of myself as a thru-hiker. “Are you doing the whole thing?” she asked again. “Oh, yes, all the way around!” I replied. The group was heading out after doing an out-and-back hike, so in their eyes a thru-hiker was what I was. They were impressed by how small my pack was, and I told them it’s heavier than it looks. After moving on, I ran into several other groups, a mixture of day hikers and overnighters. In total, I saw 23 people on the short 7km stretch to my campsite. 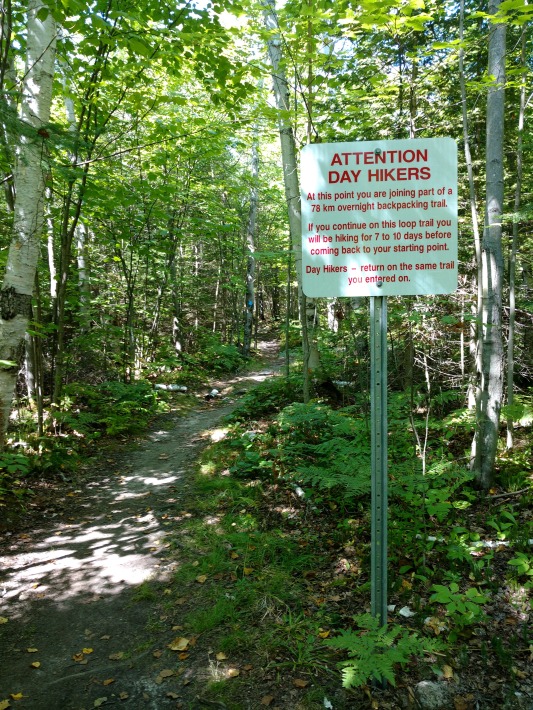 The classic sign to scare off day hikers. Lol @ 7-10 days.
Much of the hiking today was forested, which was very nice, but the occasional glimpses of that classic rugged La Cloche terrain have me excited for what’s to come. The trail started off easy enough. By that I mean it was actually moderately difficult, but a walk in the park compared to the terrain I am anticipating later. The trail was extreme rocky and rooty at many points, and there were a good number of ups and downs (though nothing extreme). There were a few stream crossings that could definitely get your feet wet in another season or year. Since we’re nearing the end of a dry summer, the water levels were quite low. It was warm, sunny, and relatively humid, so I worked up a sweat pretty quickly.

View of Acid Lake through the trees

I checked out a campsite and took a snack break on what I thought was Acid Lake, but turned out to be the small lake next to it. Still very nice. Although the actual Acid Lake was much more scenic when I reached it a few minutes later. With the short distance I had to hike, I was going at a fairly relaxed pace, and allowing myself time to explore some of the scenery around the trail.

View of Cave Lake from a ridge above my campsite!
I arrived at my campsite on Cave Lake just before 4pm, which is probably my earliest camp time yet this summer. The site is sooo much nicer than I was expecting! For some reason, I had the idea that Cave Lake wouldn’t be very nice (I think because it’s not a classic Killarney “dead” lake), but it is really quite beautiful! My site is very large, a bit off the trail, with an absolutely gorgeous view of the whole lake! And the tent pad has a view of the water too, bonus!

My set up for the night! Such an awesome view.

It took me a bit of searching to find the thunder box, which I eventually found marked with a brown trail marker (hilariously appropriate, but with not great visibility). The only other issue I’ve found with the site so far is that the next water body over, “The Pool” is directly connected to Baie Fine and gets a lot of motor boat traffic, which I can hear from my site. It’s not super irritating to me, but does throw off the wilderness effect a bit.

When I arrived at camp, I set up my tent and filtered a bunch of water for the evening. After that, I gathered up a bit of firewood. I don’t often have campfires on my trips, mainly because by the time I get to camp I’m way too tired and lazy to look for wood. But since my hike today was so short, and I arrived at camp so early, I thought a fire might be nice. Plus, the next couple of nights may be rainy, meaning this might be the only evening I’ll have where I’m not cowering in my tent.

After completing all the camp chores, the lake looked super inviting… And the site seemed private enough… So yes, I went skinny dipping. In the interest of staying somewhat non-filthy this trip. After my swim, I was hungry so I got the macaroni going for dinner. My 7km hike today definitely did not warrant eating an entire box of KD for dinner, but that’s what I brought so I forced it all down.

Evening campfire 🙂
After dinner, I sat for a while and started a new book, ‘Thru-Hiking Will Break Your Heart’ by Carrot Quinn, which is the story of a Pacific Crest Trail thru-hike. I’m really liking it so far. There is one other campsite nearby on this lake, and I think it has become occupied, as I can hear occasional faint human noises. After a while, I made myself a cup of hot chocolate and got my fire going. There ended up being a bunch of big pieces of wood already piled near the fire pit, so I was able to get a pretty good flame going. I read a bit more while sitting by the fire, drinking my hot chocolate, as the sun started its descent. This campsite has a clear view facing directly west, so there was an awesome sunset over the lake.

Beginnings of sunset on Cave Lake
While the sun was setting, I brushed my teeth and got my food bag hung up. I’m now inside my tent, finishing up blogging, and I’ll definitely do a bit more reading before heading off to sleep. Tomorrow is my longest hiking day, but judging from the estimated travel times on my map, it won’t be the most strenuous. The weather is supposed to stay nice tomorrow, but the next two days could be sketchy. Fingers crossed the nice weather holds!

A glorious sunset to end the day! (Plus bonus crescent moon in the upper left)
Trail lesson of the day: It’s hard, but I need to try not to let my anxieties get the best of me. In the days leading up to a trip, I always start to get super anxious about it, but once I’m on the trail I realize everything is fine. I can do this.