While at home for the Thanksgiving long weekend, I proposed the idea of a “Thanksgiving hike” to my parents. After intently studying the Parks Ontario fall colours map, and several failed attempts by me to convince them to take a day trip to Algonquin Park (where the map claimed 100% colour change!), we settled on a visit to Mono Cliffs Provincial Park (with 70% colour change).

Mom on the South Outlier Trail!

Wetland area on the Clifftop Trail

The park has a fairly extensive trail system, allowing you to make your adventure as long or as short as you’d like. We set out from home late in the morning, and stopped at the nearby Champ Burger for lunch before our hike (top notch onion rings, and toonie beers!! Though probably better for post-hike meal, as all the food had us hiking slightly heavy). We had a full afternoon free to hike, so decided to cover as much of the trail system as we could. With it being the Thanksgiving weekend, the park was pretty crowded. We started out from the main parking lot on the Carriage Trail, which was a bit of a hiker highway. We soon broke off on to the South Outlier Trail. This trail traverses an outlier of the Niagara Escarpment, and started off with a steep climb of tight switchbacks. Thankfully, this area of the park was much less crowded. 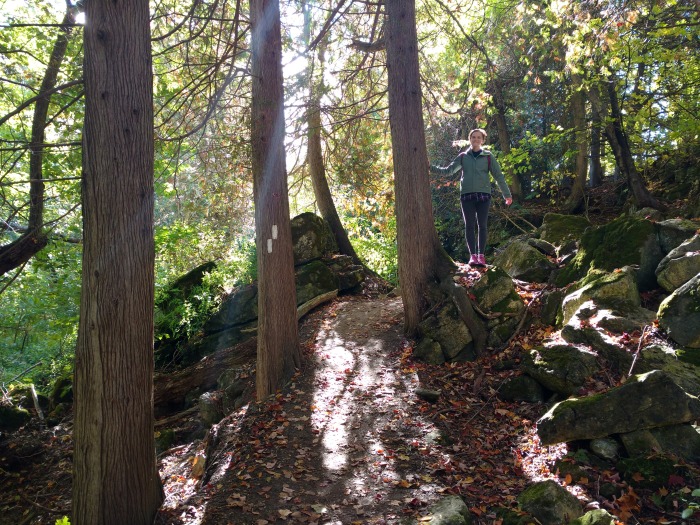 A magical wood on the Clifftop Trail 🙂

We hiked the western arm of the loop, which follows a steep cliff. We were hoping for some views, but they were pretty much completely obscured by a thick layer of cedars. It was still a lovely trail, which wound through a nice deciduous forest (that still seemed surprisingly green), and we had it all to ourselves. At the end, we descended the other side of the outlier, and hopped on to the Clifftop Trail. 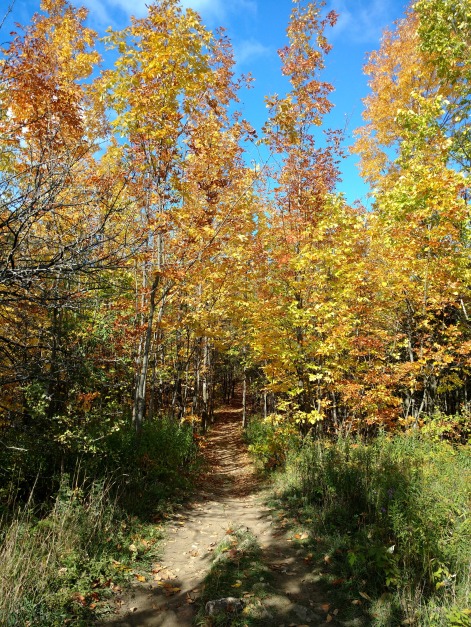 Colourful trees on the Clifftop Trail

Scene from the “viewing platform”

The Clifftop Trail was pretty awesome! It passed by a nice wetland area, and we saw a lot more colourful trees! Near the end of the trail, we came to the lookout platform, which has a pretty nice view of all the trees in the valley below. There were some pretty awesome fall colours, but the platform was pretty crowded. Shortly after the platform, there is a set of stairs that descend down to a short walkway through a crevasse in the escarpment! 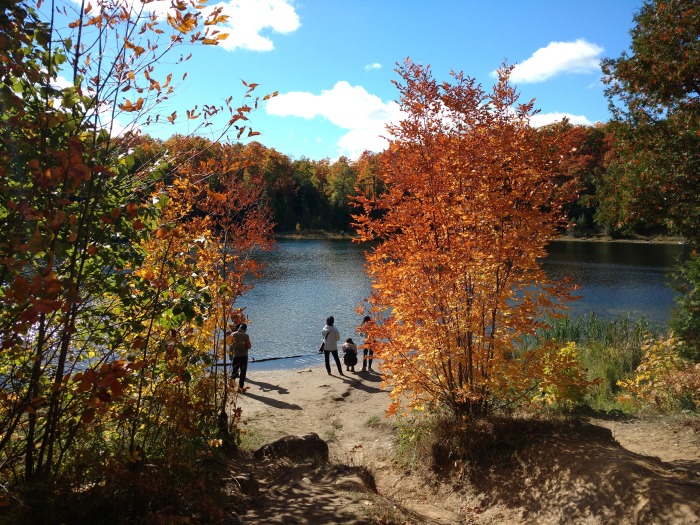 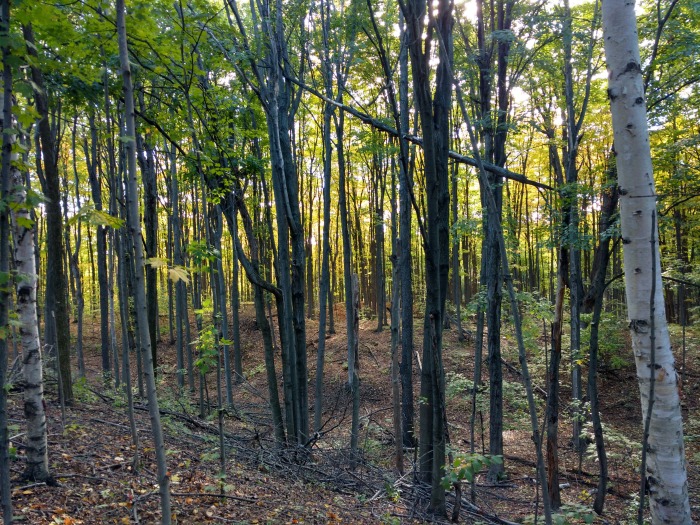 As we were nearing the end of the Clifftop Trail, we decided to jump on the McCarston’s Lake Trail. We only hiked a short section of it, but we got to pass by the lake, which was absolutely beautiful! The sun was shining, the water was sparkling, and there were brightly coloured trees all around! After a brief stop at the lake, we made our way to the very aptly named Lookout Trail. At this point, it was starting to hit late afternoon, and the sun was shining through the trees in the most beautiful way. I say the Lookout Trail was aptly named because it lead us to the most incredible lookout! There was a breathtaking view of the forest as far as the eye could see, with patches of bright orange, yellow, and red sprinkled with trees that were still holding on to their green colour. We stopped for a little while to admire the view and do a bit of a photoshoot.

Views on the Lookout Trail!

When we left the lookout, we immediately plunged into a dense evergreen forest, and compared to the bright sunlight of the lookout, it seriously felt like night had suddenly fallen. I could barely see where I was stepping, and I found out after that my dad had been wearing transition lenses that left him almost completely blind. The contrast was just so stark and shocking, it was pretty funny. Once we had completed the Lookout Trail, we met up with the Walter Tovell Trail, which took us back to the Carriage Trail out to the parking lot. In total, our hike ended up being about 12km, and we got a taste of almost every trail in the park! This was my first time visiting Mono Cliffs, and I definitely enjoyed it! I would like to go back some time when it’s not quite so crowded, but the fall colours were absolutely gorgeous, and it was a great way to spend a holiday weekend with family.