Today was a hard day. It was off to a slow start right off the bat, since I was so sleepy and comfy in my sleeping bag that I didn’t start getting ready for the day until almost 7. Last night was definitely the warmest night so far. I didn’t have to sleep in my puffy or even my sleep socks.

Michael, Charlie Brown, Sage, and Bob all passed by my spot while I was trying to get moving. I started hiking around 7:30am. Sleeping in definitely isn’t advisable in the desert, as the day gets unbearably hot quickly once the sun is in the sky.

The first couple miles of the day are always kind of hard. My feet are like “Wait, what?! We’re doing this again?!”, and it takes them a little while to warm up to the idea of walking. It didn’t take too long for me to reach the highway underpass at Scissors Crossing. All the hikers who had passed me in the morning were there, as well as a couple others. One of the volunteers who helps maintain the water cache was there picking up empty bottles, so it was cool to get to meet him. I sat under the bridge for a while eating some cold oatmeal and drinking my coffee shake.

There was a long, hot climb out of Scissors Crossing. We gained about 1000 feet of elevation over the day, but most of it was pretty gradual so it wasn’t too bad. The initial climb was somewhat gruelling, but looked like something out of a fantasy land. The hills were painted with splashes of greens, yellows, and pinks, and the trail was lined with strange desert vegetation that looked like something from a Dr. Suess story.

Once we got up onto the ridge, the trail wound around the hills for miles and miles, pretty much all day. It was hot and exposed, with pretty much zero shade. I saw my third rattlesnake of the trail, who was perched up on the slope beside the trail. It let me pass by without any reaction. I finally stopped again about ten miles into my day for a lunch break. There wasn’t any shade, but there was a nice flat area to stretch out, and I did manage to position my head under a shrub to get a little bit of shading. A bunch of new hikers passed me while I was lying there, so I got to meet a bunch of new people. 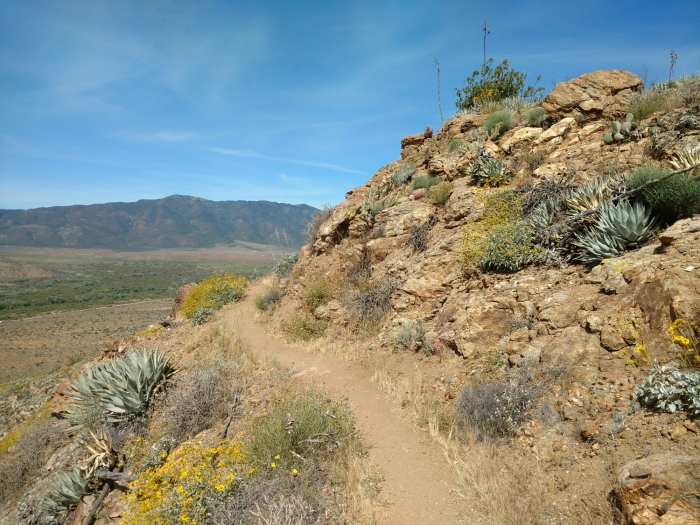 After about an hour, I finally convinced myself to move again. There were about six and a half miles to the next water cache. It was the heat of the day, and it was pretty brutal. I leap frogged with Michael, Sage, and some of the new hikers. After a few miles, I found a patch of shade and gratefully sprawled out in it, even though it was on a somewhat steep slope covered with rocks and scratchy plants. I couldn’t make myself leave the shade for about half an hour.

When I got going again, I turned a corner and suddenly things started to change. Instead of cacti and scrub, the trail was lined with grass and green shrubs. I heard voices ahead, and finally came to a large sign pointing to “WATER”! The actual cache was about a quarter mile down a side trail, and I was so so happy to get there. We’re not supposed to rely on water caches as sources, but I don’t know what we would do without them. The only two sources today were both caches. The people that stock them are seriously angels.

I decided to set up camp at the junction of the PCT and the Third Gate cache side trail. There are a ton of other hikers camped out in the general vicinity. I’m cowboy camping again tonight out of sheer laziness. When I started pulling my stuff out of my pack, I realized one of my Platypus water bladders had sprung a leak, and most of my stuff was wet. Luckily, my sleeping bag was dry, which is the most important thing, but all of my clothes, my puffy, and my sleeping mat were damp. My mat dried quickly, so it’s alright to sleep on, and my merino wool pj tights dried out enough, but I’m sleeping in my hiking shirt and rain coat tonight since my pj shirt was still too damp.

Is that my campsite or a pile of random trash?

I set up my little spot and cooked some rice for dinner. It was my first time trying the pot cozy method (where you boil the water and then let the food sit in the cozy off the heat until it’s cooked), and it worked out awesome! I ate dinner with Soren from Denmark and Bob, and now I’m cozy in my quilt. There seem to be some mosquitoes buzzing around, so hopefully they won’t bother me too much tonight. I’ve had this itchy spot on my lower back for a bit, which I just assumed was a mosquito bite, but I just looked closely at it tonight and I’m pretty sure it’s poison oak. Woo! Another hiker just showed up who had run out of water 5 miles ago, so I gave him a bunch of mine to drink. He’s going to go down to the cache and fill it up for me again though.

I need a better plan for tomorrow, to try and avoid walking so much during the heat of the day. I’m going to try to get up and hiking super early, and make it to the next water source 10 miles from here before noon. Then I’ll spend the first couple hours or so of the afternoon chilling by the spring, before moving on. I want to try to push 18.5 miles to get to Warner Springs tomorrow night, but we’ll see what my feet say.