The stars were gorgeous again last night. It was quite warm out and I slept pretty well, but my sleeping bag was covered in condensation again when I woke up. I woke up early and lay in my sleeping bag until I heard sounds of movement around me.

I was hiking by about 6:30. As soon as we started winding up and out of the canyon, I felt a warm breeze blowing, which felt nice in the cool morning, but seemed a bad sign for later in the day. In contrast to the entire day spent descending yesterday, today was a day of climbing. 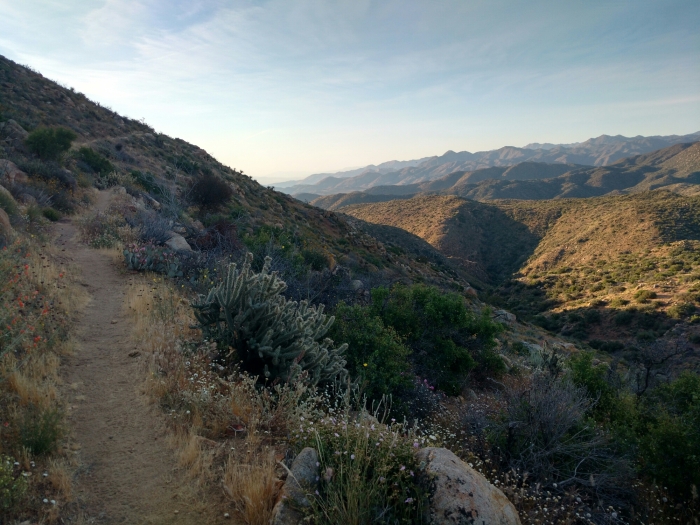 In just a couple of miles we reached the Sandy Jeep Road water cache. There was no water left, reminding us that caches shouldn’t be relied upon, but we signed the trail register. A couple of miles later, we reached a new water cache called Walden. It was really awesome, there was water, picnic tables, trash and recycling bins, and a little library of books. There was also a cooler full of grapefruits, which my body greatly appreciated as part of my breakfast. I don’t think I’ve ever enjoyed a grapefruit so much (actually, I don’t know if I’ve ever enjoyed a grapefruit until now). We all made use of the picnic tables for a breakfast break, and then moved on.

A little while later, Gummies and I were crossing a dirt road and noticed there was a large rattlesnake stretched across it. It seemed pretty chill, so we started walking past, but suddenly it coiled up and started rattling like crazy and slithering towards us! We scattered as it slithered off into the bushes. That’s my sixth rattlesnake of the trail, and the second that’s actually rattled at me.

We rounded a corner and got another great view of Mount San Jacinto, looming ever closer. The trail wound down into a canyon, which was disheartening because I could see it in the distance climbing all the way back up the other side. By then it was the heat of the day, and the climb was pretty steep and brutal. Most of the climbs on this trail are pretty gradual, but this one was rough. At the top, we were only a couple miles away from the Paradise Valley Café, but I was struggling to keep walking in the heat. I took a short break to make some gatorade and eat a snack, and then popped my headphones in for the last couple miles down to the cafe, and suddenly I was flying. Music really does make the hiking so much easier when you’re feeling tired.

Soon, I was down at Highway 74, and Gummies, Cougar, and Mick (who I think we have successfully trail named Dr. McDirty) weren’t far behind. The cafe was a mile down the highway, so we briefly tried hitching, but then just decided to walk. A mile on the trail feels like nothing, but a mile off trail feels like eternity. Finally, the Paradise Valley Café materialized ahead of us.

At the restaurant, surrounded by normal, non-hiker people, I became acutely aware of how filthy I was. I got a veggie burger and a chocolate milkshake, and it was soooooo good. We sat for a long time after eating, trying to digest and watching as other hikers arrived. Most of the hikers are hitching directly into Idyllwild because part of the trail is closed due to forest fire damage, but we decided to hike into town on the alternate route provided by the PCTA.

Before we left the restaurant, the staff were nice enough to fill up our water bottles for us. It’s so awesome to see places be so hiker-friendly, especially with the way we smell. A trail angel gave us a ride back to the trail in his truck, and gave us beers out of a cooler before we got back on trail. I didn’t catch his name, but thank you!!!!

We were aiming for a camp spot about 4 miles up trail, and they felt like a very long 4 miles. It was hot, and we were moving slowly after the food and beer. This section of the trail was really cool though, and unlike anything we’ve seen yet. We were hiking around and through all these massive boulders and rock faces. There were some huge pine trees too. Finally, we reached our nice shady campsite. I set up my tent because I didn’t feel like cowboy camping under the trees.

Once we were all set up, we sat around and talked for a while, before it was time to head to bed. No one made dinner, since we were all still stuffed from the big lunch. Hiker hunger clearly hasn’t truly hit yet. There are bunch of mosquitoes about, so I’m glad I have my tent set up, even though they seem to go away once it’s dark. Tomorrow we’ll start making our way into Idyllwild on the fire closure alternate.

4 thoughts on “PCT Day 11: Take Me Down to the Paradise Valley Café”