Today was a loooong and hard day, even though we barely made any miles. We caught a ride to the Devil’s Slide trailhead from the Idyllwild Inn around 8am, and were extremely glad to not have to do the road walk back to the trail. We started climbing just before 8:30.

During the drive from town to the trail, we had already ascended about 1000 feet, and over the 2.5 mile Devil’s Slide trail, we climbed another 1700. It was a hard climb, but fine if you took it slow and steady. There were tons of beautiful views to take in, which provided convenient excuses to take a break and catch your breath. 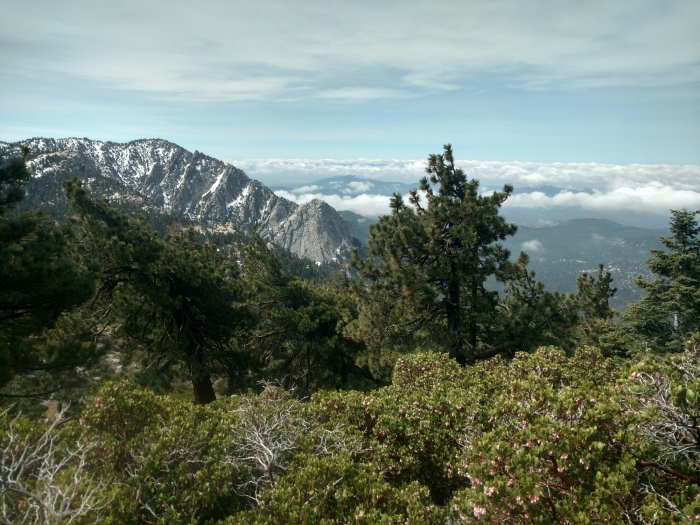 We came across our first patch of snow at an elevation of around 7500 feet, and it was very exciting. When we reached the junction to get back on the PCT, we sat for a while to re-energize with snacks. Before long, we started seeing more and more snow. Soon, the trail was completely covered in it. We stopped briefly to practice some controlled self-arrests with my ice axe, which was fun. I don’t know how my brain will react in a situation where I’m actually falling though. We also stopped to put on our microspikes when it became clear the snow wasn’t going to end any time soon.

This is definitely (not) proper self-arrest technique

We reached the junction for the San Jacinto summit trail, and excitedly began our climb. We followed some foot steps in the snow, but quickly realized we were off trail. It was about 100 feet above us, and we ended up having to scramble up a snowy slope, kicking in steps with our spikes. The summit was off to an interesting start. 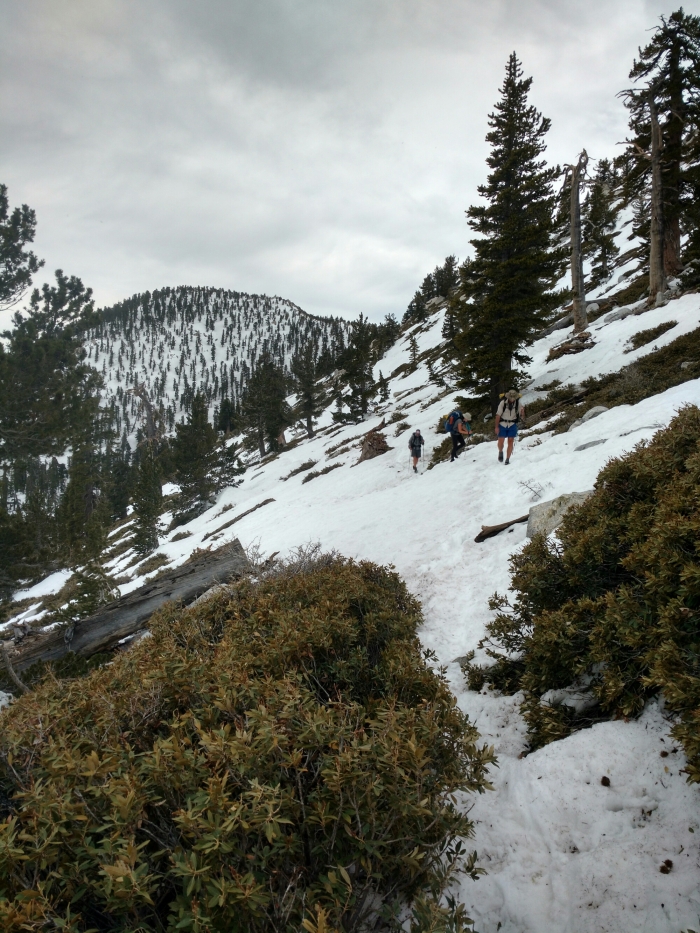 We saw tons of non-PCT hikers coing down the trail, and one let us know that the trail was snowy but “definitely doable”. We were actually able to remove our microspikes for a while, as there was a stretch of nice, dry trail, but soon they were back on again. Over the course of the summit trail, we climbed another 1800 feet. I postholed a couple of times up to my knees, and once up to my hip which was kind of scary, but other than that the hiking was alright. Alright, but slow. Our pace was reduced to less than a mile per hour, since it was entirely uphill, and entirely covered with snow. It was hard to follow the trail, with footsteps sometimes seeming to go in every direction.

The last bit of trail switched up across fairly steep snowy slopes, which was pretty intense. We finally made it to the final short spur trail to the summit, and excitedly scrambled up the snow. I cheered when I finally saw the summit sign! We made it! We were finally standing on top of the thing we had been watching in the distance since day 4. 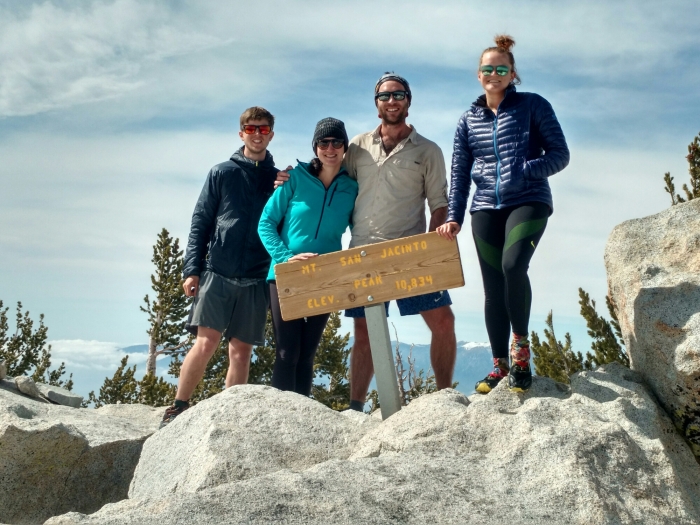 We collapsed on the rocks, exhausted and hungry. I had tortillas with cheese and avocado, a special treat for the first day out of town. We all got photos taken at the summit, and then started to pick our way back down. Going downhill was definitely less taxing than going up, and it was kind of fun to just slide down the slope. It was like skiing with no skis.

We continued our descent along the alternate trail, trusting that the footsteps in the snow were going the right direction, occasionally reassured by a glimpse of trail peeking out of the snow. Eventually, we made it to a spot on the map marked as “Little Round Valley Campground”, but it was mostly covered in snow. We were only a mile from being back on the PCT, so we debated continuing on vs. stopping to camp on the alternate. We decided to stop where we were, since we weren’t sure when we would come across a spot to camp on the PCT.

Saw a sign for an outhouse, got really excited, but then….

We found some pretty nice flat, snow-free patches of ground and pitched our tents. We sat together and made dinner, and I really wanted comfort food so I made ramen with sriracha peanut butter. It was soooooo good. Cougar and Dr. McDirty made me a cup of hot chocolate, which made me super happy. 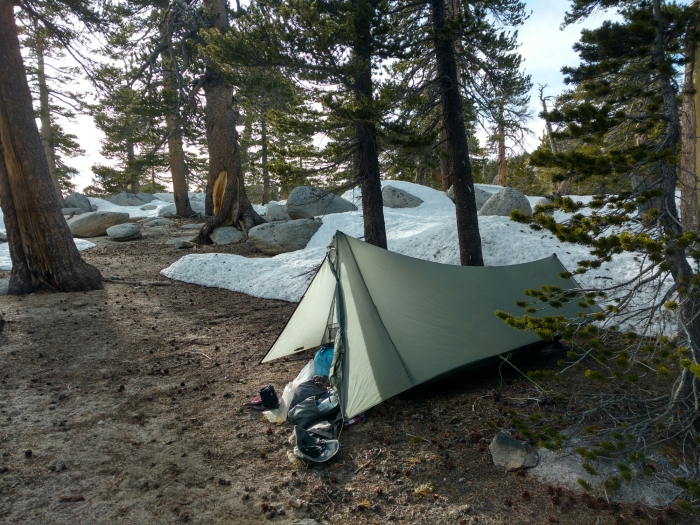 We’re camping at 9600 feet, and I think it’s going to get pretty cold tonight. A bit of a wind has come up and I’m bundled into my quilt and puffy to stay warm. Tomorrow, we’ll tackle Fuller Ridge, which hopefully won’t be much worse than anything we encountered today. There’s been a ton of fear mongering going around about this section, but with microspikes it was totally do-able. I’m so glad that we chose to do the summit, even though it took up pretty much a whole day off the PCT. I’m definitely proud of myself too, since this was the first major summit I’ve ever climbed to, and it was freaking hard, but I did it! I’m going to read a bit of my book now, and then hopefully drop into a good night’s sleep after a super tiring day.