Well, I didn’t quite get the good night’s sleep I was hoping for last night. Gale force winds came up out of nowhere, and they were so loud it sounded like a train going by, and so strong they ripped one of my tent stakes out of the ground, causing my tent to collapse on top of me. After I had replaced the stake, and placed large rocks on top of all the stakes, I lay awake in my tent, cringing at every gust of wind and praying the tent wouldn’t collapse again. Luckily, it didn’t, and the wind died down at some point during the night allowing me to finally get some rest.

When my alarm went off at 5:30, I really wanted to stay in my warm cozy quilt and sleep a bit longer, but I soon heard the others moving around so I started to get ready. I was quickly awakened by traversing the snowy landscape and crossing a couple streams, and I soon forgot about ever wanting to sleep in.

Walking on the snow was MUCH easier when it was hard and frozen in the cold morning, and the microspikes really showed their worth. I could walk down a fairly steep slope of snow and not slip at all. 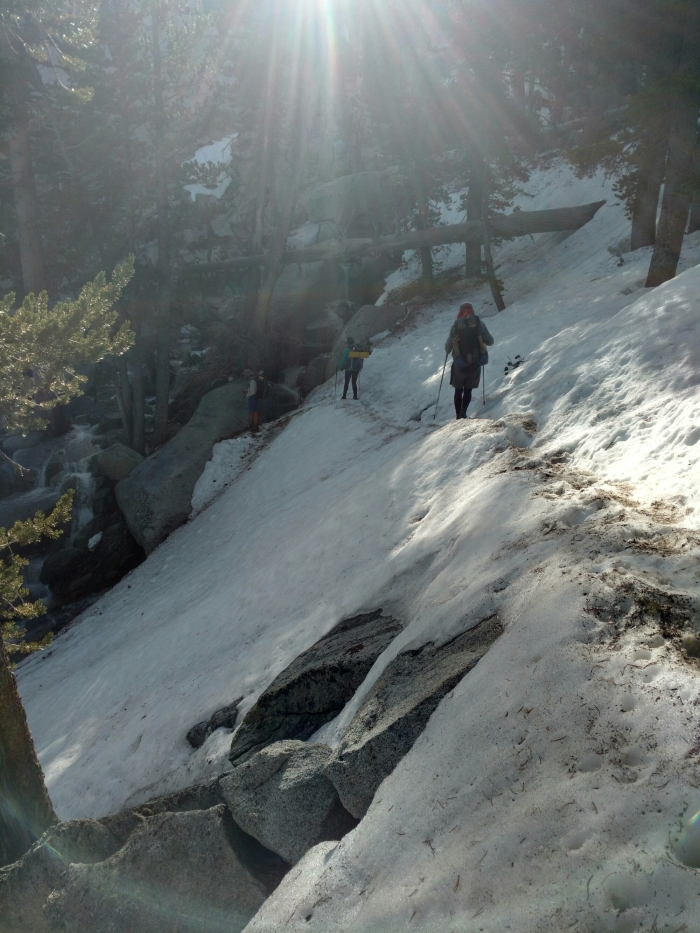 Crossing the snow before the San Jacinto River

Soon, we made it back to the PCT, and crossed over the north fork of the San Jacinto River, which was kind of scary but also really cool. We had to cross a steep snow slope and then scramble and rock hop across the rushing flow. 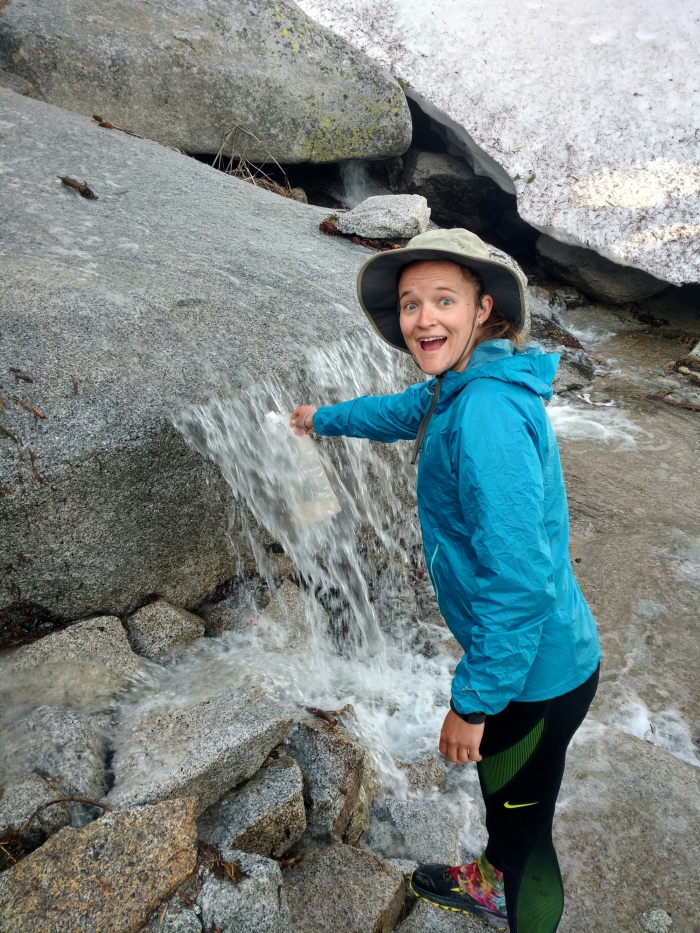 We took off our microspikes and put them back on several times throughout the day, as the snow came and went on the trail. We seem to be in a new bubble of hikers, as we saw tons of people on the trail today, but I didn’t recognize any of them. The day was spent going almost entirely downhill, with a few unexpected climbs thrown in to keep things interesting. We dropped over 6000 feet over the course of the day.

Late in the morning, we approached Fuller Ridge, which has been the subject of much fear mongering. It really wasn’t bad at all. There was a ton of snow, but we did most of it without even putting our microspikes on, and it was totally fine. It was slow going though, and by noon we had only covered 6 miles. We finally arrived at the Fuller Ridge trailhead, and all my dreams came true when I saw there was a picnic table! Getting to sit and eat at a table is a serious luxury. We had a nice lunch break there before moving on, ready to make some miles on the finally dry trail.

The views today were absolutely gorgeous. We wound around views of snow-capped San Gorgonio Mountain and the desert far below, and then we turned a corner and got great views of the back of San Jacinto. It was super cool to see the snowy summit where we had stood a mere 24 hours before, from far below, knowing we had climbed all the way down. As we descended and left the snow behind, we witnessed the return of our desert lizard friends, and wildflowers lining the trail.

Even though we didn’t do a huge number of miles, and the hiking wasn’t super strenuous, it felt like a very long day. I put in my headphones to listen to music for the last several miles of the day, and hiking through the hills during the golden hour with some of my favourite songs playing was really magical.

We passed the 200 mile marker, which is pretty exciting. Even though it’s fairly insignificant on the spectrum of a full thru-hike, it’s still something to be proud of. It’s too easy to get overwhelmed if you think of how far there is still to go, so I’m just trying to take it one section, one day at a time. We were aiming for a camp spot about a mile after the 200 marker, but when we arrived there were already 6 or 7 tents set up and not a patch of flat ground left. There was supposed to be another site about a half mile further, so we pushed on. When we arrived at the spot, there wasn’t a super obvious spot to pitch a tent, but we all managed to grab a patch of relatively flat ground. We’re camped in the shadow of San Jacinto and there’s a pretty awesome view. The only problem is the wind. There had been blasts of intense wind on and off throughout the day, and this site seems to be right in the middle of a gale force windstream. It was an epic struggle to set up my tarp tent, and then Gummies and I had to wedge ourselves between two bushes in order to cook dinner. When I finished dinner, one of my stakes had been ripped out and my tent had collapsed. It’s managed to stay standing since then, but it’ll be a miracle if it makes it through the night. It seriously looks and sounds like it’s about to take off. I hope my trekking poles are able to stand up to the strain. I might need to order new stakes, because right now I’m just using the ones that came with the tent and they aren’t doing a great job of standing up to wind.

It looks pretty, but don’t be fooled…

As I was lying in my wildly flapping tent writing this, Cougar and Dr. McDirty came over to tell me that they had packed up their tent and were walking on in the dark in hopes of finding something more sheltered. I hope they’re able to find something. I’m just going to pray the wind dies down soon… According to the weather forecast on my InReach, it should be getting better by 10pm. I really hope that’s true. But so far, it looks like another restless night for me.