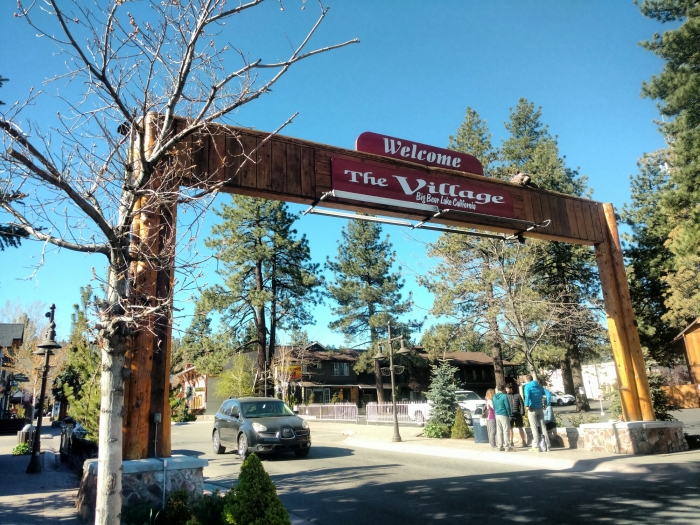 We finally got up and made our way over to the post office. I mailed my ice axe and microspikes ahead for the Sierras, grateful to be rid of the extra weight. We walked a half mile down the road to the Grizzly Manor Cafe. It was a really cool place, the walls and door were covered with stickers, and they sold MASSIVE pancakes. Like, massive. They offered single pancakes, short stacks, and full stacks, and we were all debating how many we should each get when a woman at the next table leaned over and said “You’re gonna want one”. I’m really glad we took her advice because each pancake was about the size of my torso. I couldn’t even finish one. They have a pancake challenge where if you eat 6 in an hour, you win 50 bucks and get your picture on the wall. Only 4 people have ever successfully completed it. I don’t know how it’s humanly possible. 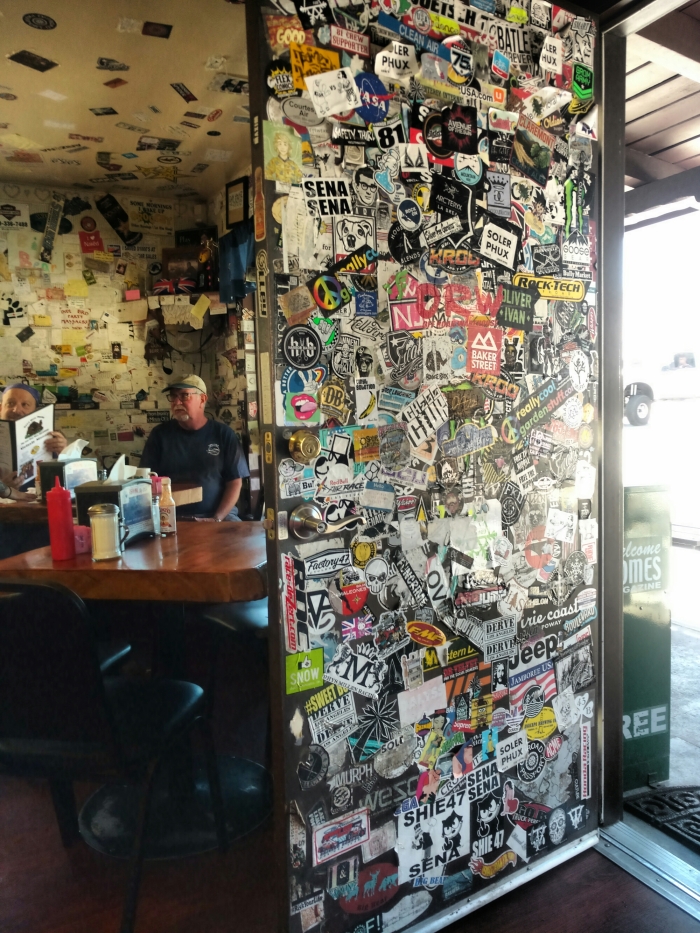 Door at the Grizzly Manor Cafe 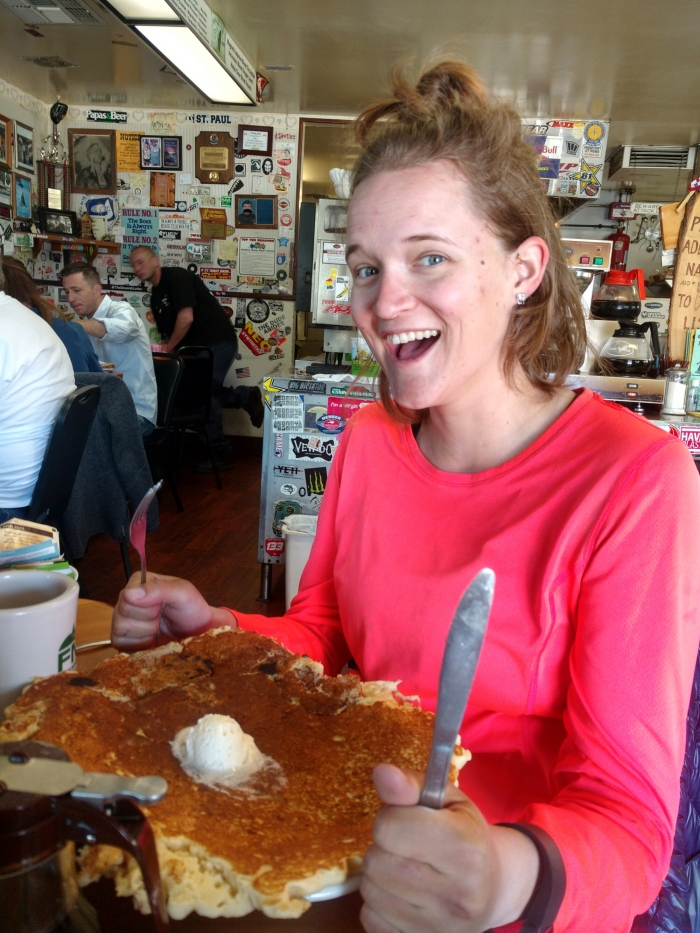 I was shamefully defeated by this pancake

We walked across the street to the sporting goods store to get fuel. I looked for tent stakes but they only had the cheap ones, so I just bought fuel and sport beans (jelly beans with caffeine and electrolytes, YAAAAA). Then we decided to hitch up the road to the grocery store. We started slowly walking with our thumbs out, and many vehicles passed us but then someone pulled over! The woman driving agreed to take us to the grocery store, but first she had to go home because her dog had gotten out. We all helped her try to find the dog (Solo the basset hound), but we were unsuccessful, so she took us on to the grocery, after giving us raspberry sparkling seltzer water. It felt soooo good on my pancake-filled stomach. Another super successful hitch. 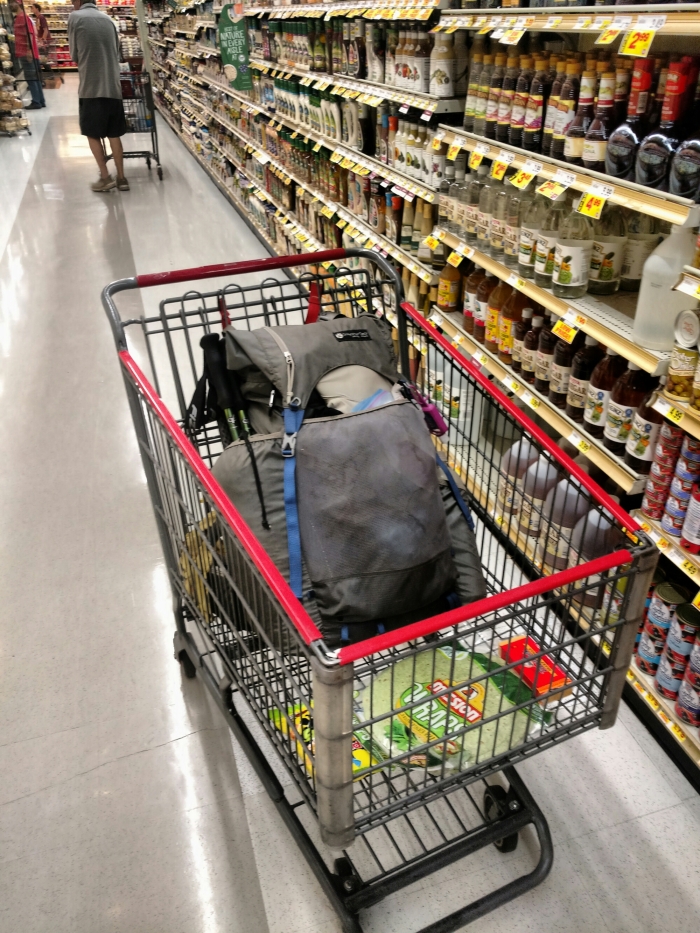 How to spot hiker trash in the grocery store

At the grocery store, we wandered up and down the aisles trying to find hiker food. This grocery store was much more well-stocked than the one in Idyllwild. I got a ton of delicious food. Maybe too much. I’m not able to close my food bag right now because it’s so full, and a few things don’t even fit in there. 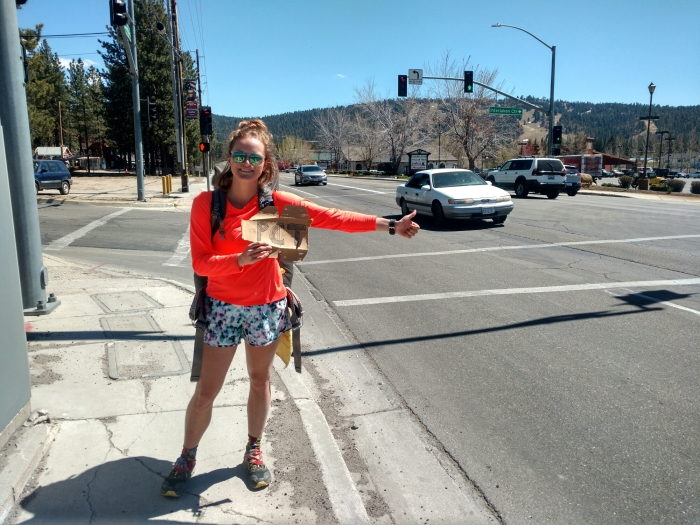 We went across the street to the other grocery store, and got fresh food to pack out for our first night out’s dinner. I got a Greek salad and potato salad. We also got a four pack of beers. I used the WiFi to rush order some MSR groundhog tent stakes to our next town, Wrightwood. Then it was time to hitch again. We made a little cardboard sign for the “PCT”, and headed across the road. Cougar was just taking a picture of me holding the sign, when a car immediately pulled over. We seriously have magical hitching powers. The woman had a ton of stuff in her car, including three daschunds. She rearranged everything so we could squeeze in with our packs. I sat in the front with two dogs on my lap. Again, she went totally out of her way to take us all the way back to the trail. Our hitching experiences in Big Bear have all been amazing. I’m ruined for life now. 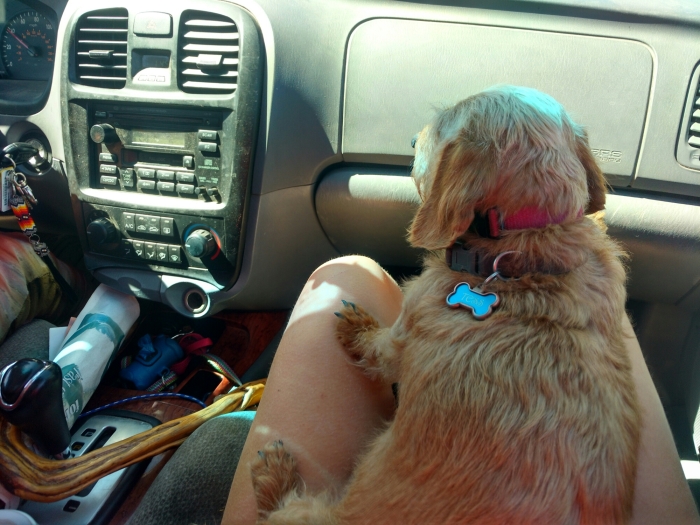 We had a plan to only hike 2.5 miles to camp, which was awesome. We’re at another “trail camp”, so there’s a picnic table and a PRIVY!! It’s pretty luxurious. We sat at the picnic table to eat our salads and drink our beers. My body was sooo happy. Dr. McDirty taught Gummies how to play backgammon. We were joined in camp by Harry, Yard Sale, Bandit, and Metric, and a couple of other guys showed up a bit later. Tomorrow we’ll start hiking again for real, but it’s been a very lovely near-o. 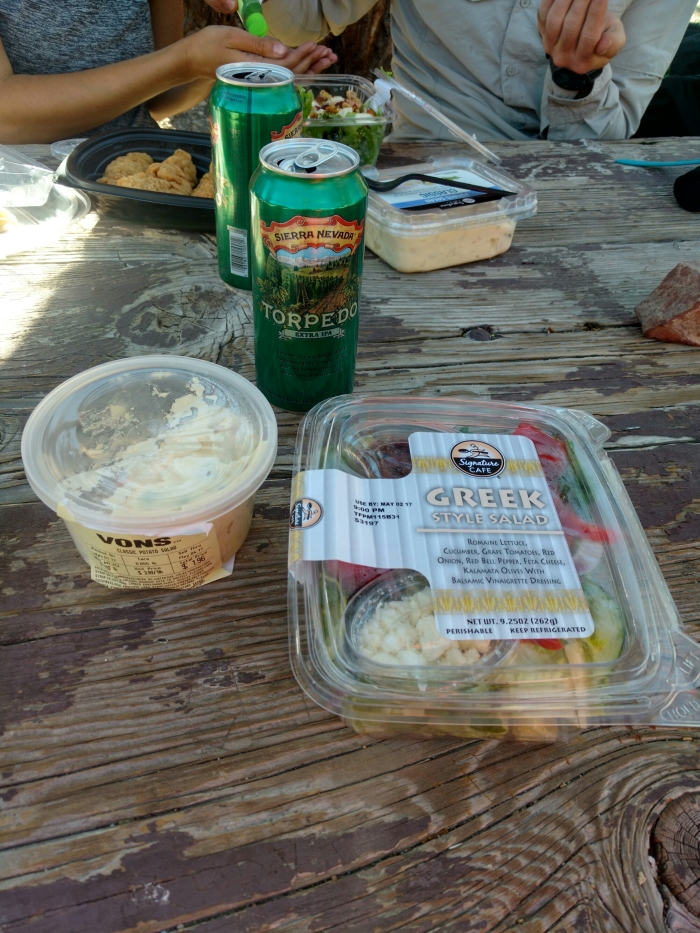 My body is happy.