Last night was not a good night for cowboy camping. As soon as the sun went down, my quilt was covered in condensation, which has happened a couple of times before, but was more of a red flag this time around due to the potential impending weather. I tried to ignore it and eventually fell asleep. I woke up a while later, and couldn’t see the moon or any stars. There was a fine mist in the air. I slowly realized that we were inside a cloud. At first, I tried just inserting myself into my tent while it was still lying flat, kind of like an extra waterproof blanket. Then I figured that was just trapping the moisture that was already there against my quilt, so I grudgingly set up my tent in the dark. The stakes actually held pretty well. It was a shitty pitch, but it provided shelter against the mist which was all I wanted at that point.

Woke up in a cloud. Oops.

When I woke up, the morning light revealed that the world had been shrouded in mist overnight. We really were stuck in a cloud. We got a bit of a slow start, hiking out a little after 6:30. This morning’s trail was like a whole new world. We had never seen the trail in this light before, gloomy and damp and shrouded in mist. It was like we had been transported from the desert to the rainforest. It was probably a good thing that today was cool and cloudy, since we spent the entire day climbing up from around 3000 feet in elevation to an elevation of around 8000 feet. Although most of it was at a nice gentle grade so it wasn’t too bad.

I stopped after a few miles to eat my oats, then less than a mile later when the sun briefly came out to lay my tent and sleeping bag out to dry. As I hiked, the views constantly changed as the clouds blew around the hills. Everything would be completely covered in white mist for a while, and then suddenly the wind would blow the clouds away and I could see all the hills around me. I stopped for a quick break to eat some chips, and the scene in front of me cleared and then clouded over and then cleared again several times in the ten or fifteen minutes that I was sitting there.

We were in a burn area for a lot of the day, which looked even more desolate and creepy with the rolling fog. There were also some pretty sketchy sections of trail, where the trail had pretty much completely washed out, leaving us to pick our way across steep, shifting slopes of sand and scree. I rounded a corner and found a trail crew! They were working on clearing some dead wood off the trail, but said they were going to go try to fix up those sketchy sections next.

As soon as I rounded that corner, the clouds suddenly lifted and the sun came out. There were awesome views of the snow-covered mountains. That definitely lifted my spirits, and I hiked on happily. Gummies caught up to me, and we stopped for a lunch break under an amazing view of the mountain (I think maybe Pine Mountain??). The sun was out, and I felt like I could lay there in its warmth forever. I had to put on sunscreen, and pull out my sunglasses and hat. Thoughts of rain and snow were far from my mind. Obviously the weather forecast was wrong.

We hiked on after our break, and everything continued to be great for a while. We passed Cougar and Dr. McDirty having their lunch break, and left them with a cheery “see you at camp!”. We had planned to camp at Guffy Campground, which was only about 5 or 6 miles away.

We rounded a corner, and noticed the clouds were beginning to blow back in, but now they looked slightly more grey and threatening. A bit of a wind began to blow, and I felt that it was carrying tiny water droplets. The wind picked up, and the water droplets began to turn into full on rain. We stopped to put on our rain jackets, and make sure everything was nice and water proofed. The wind kept getting stronger. I stopped again to put on my rain pants. This whole time we were climbing ever higher up the mountain. I realized that the rain was no longer rain, but tiny particles of ice. The wind now threatened to blow us off the side of the mountain with every gust, and the tiny icy particles had grown into full blown hail. My face stung as the wind whipped the ice at us horizontally. We kept hiking. I don’t think I’ve ever covered that kind of distance and elevation gain so fast. I was desperate to get to some kind of cover, and I wasn’t stopping.

As we got higher and higher, the air got colder and colder. I started losing feeling in my hands, and finally stopped to put on my gloves. We were close to camp now, though I wasn’t sure if it would bring us any kind of relief. I didn’t think there was any way my tent would be able to stand up to the wind. Thoughts of town were dancing in the back of my mind (it was so close!), but I tried not to think of them. The last stretch before the campground was an insanely steep and difficult uphill (of course). When we finally reached the top, the campground didn’t seem to offer anything in the way of shelter from the wind and heavy hail. Then Gummies said, “I think I saw buildings over there”. 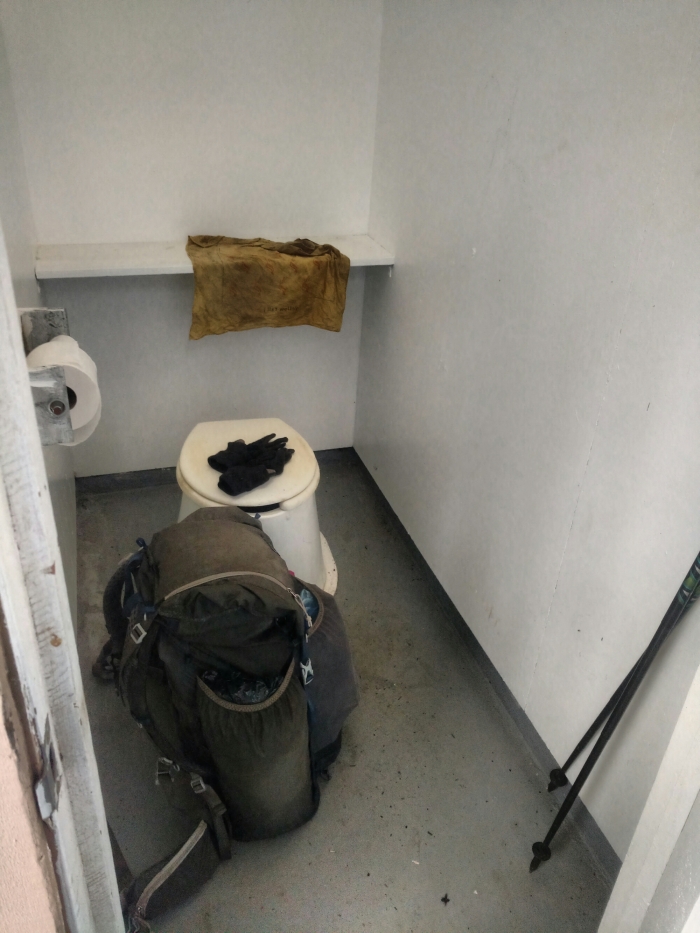 A brief place of sanctuary

I’ve never been so happy to see a pit toilet in my life. We each went into one of the tiny stalls, and the fact that the wind couldn’t reach me in there almost made up for the fact that it smelled awful. In the outhouse, I changed into every item of clothing I had. We were honestly starting to think we might have to camp out in there. Suddenly, I heard what sounded like an engine. I ran outside, and saw a truck disappearing into the white out. Gummies heard it too, and we both ran after it, but it was already gone. While we were standing there in the hail, Cougar and Dr. McDirty showed up! I was so happy to see them because I was worried they would never find us locked away in the toilets.

We made a plan. We would backtrack a mile to the junction for the Acorn Trail, a 2.7 mile descent down the back of the mountain into the town of Wrightwood. We prepared ourselves, then set off into the storm. On my feet I had two pairs of socks and my shoes, on my legs I had two pairs of tights and my rain pants, on my upper body I had my wool base layer, hiking shirt, down puffy, and rain jacket, and on my head I had my fleece beanie, rain jacket hood, and sun hat (cinched down to help keep my hood on). I also had my buff and gloves. I was fully bundled.

Heading out into the storm

I practically ran down the Acorn Trail. It was steep downhill the whole way, but was nice because it was on the back of the mountain which was mostly sheltered from the wind. Before long, we reached the streets of Wrightwood. We had heard that there was a church camp in town that sometimes let hikers stay, so we made for that. The hail kept falling the entire time. When we finally reached the camp, we were sooo happy, until we saw a big sign that said “SORRY NO PCT TODAY”. We were devastated, but decided to walk up anyway just to see what would happen. The office seemed deserted, and we were standing on the porch at a loss when a girl came out of the dining hall. We must have looked pretty pathetic, because she took one look at us and said, “I guess you guys can stay in the lodge”. Our hearts soared. Then she said “We also have a bunch of leftover food if you guys are hungry”. Our hearts almost exploded. She took us to the lodge, which was warm and filled with bunk beds. We left our stuff, and headed back to the kitchen, where we were given an absolutely amazing dinner of fish, rice, and sooo many vegetables. And cupcakes. My body was so happy. We even got to have hot tea after dinner. I’ve never been so grateful for anything. After dinner, we all had glorious hot showers. Cougar even let me use her soap and towel, so it was pretty close to the real thing. Since we hadn’t planned to be in town tonight, we have a room booked at one of the hotels for tomorrow and Monday night, since Monday was supposed to be our zero. But since we’re here tonight, we get a DOUBLE ZERO. That means I can shower three days in a row if I want to. It also means I can do all my town chores tomorrow, and then have a full day to do NOTHING. The wind is still howling outside, and I’m so grateful to be inside a warm building. Trail magic is so real. 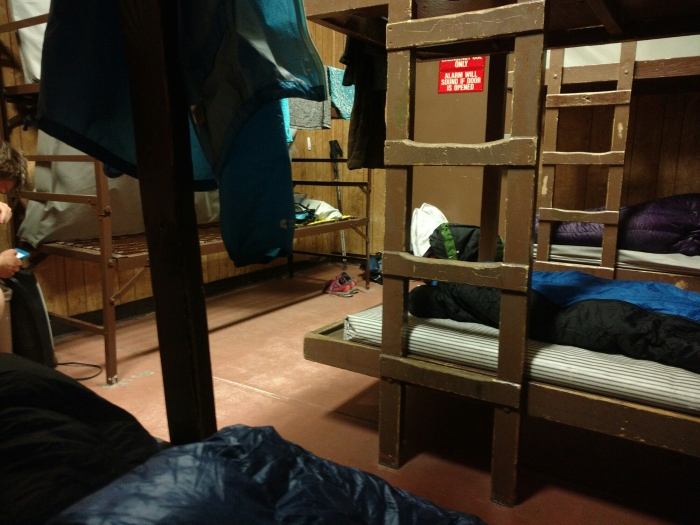 A much better place of sanctuary

One thought on “PCT Day 26: We’re Sorry, You Have Exceeded the Maximum Allowable Amount of Sunshine and Heat ”