I slept like a baby last night. Our plan had been to head to the coffee shop around 7 and hopefully get a ride from a guy who said he usually hung around there to pick up hikers. When I woke up, I found out Cougar had woke up in the night with horrible leg cramps, and was still in a lot of pain and unable to really walk. We headed over to the coffee shop (slightly later than planned) to see if Gummies and I could get a ride while Court and Dr. McDirty tried to find out if there was a physiotherapist in town. The closest one was a half hour away and didn’t have any open appointments until next Wednesday. Our potential ride appeared to be a no-show. Someone mentioned getting cinnamon buns, and suddenly all plans were abandoned and we were heading to Cinnamon’s Bakery.

The bakery was amazing. I got a giant cinnamon roll and a coffee, and when I was done with that I went back for a bagel creation called “The Pond”, which was an asiago bagel with dill cream cheese, cucumber, and pickled red onion. It was soooooo good. I’m so glad we made it there for our last morning, because we almost missed out.

While walking around town and doing a bit of stretching, Cougar realized her leg was feeling a lot better. She decided she could hike out, yay! The trail family remains unseparated! We went back to the hotel so everyone could get there stuff together, then swung by the coffee shop one last time to see if our ride was there, but there was no sign of him. Hitching it was.

We headed down to highway 2, which runs straight through the town as the main street, and stuck out our thumbs. We didn’t have to wait long before a guy in a mini van pulled over. We picked up another hiker just down the road and then we were on our way! We got dropped off at the spot where the trail crosses the highway, so yes, we did end up skipping about 5 miles of the PCT. We’re cutting ourselves some slack since we hiked the fire closure alternate into Idyllwild, which the majority of hikers skipped. It was our original plan to hike right to the highway, but the weather had other ideas. There’s a tiny part of me that wants to be a purist about it, but one of my goals on this trip is to chill out and go with the flow. So that’s what I’m doing.

The first few moments back on trail felt a bit weird after so long in town. Then it felt like coming home. The smell of damp pine needles and dirt drying in the sun, the feeling of my feet connecting to the earth over and over, the sight of the mountain pulling me forward… The trail feels like where I’m meant to be. The location of my bed and the view from the bedroom window change each night, but it’s all home. 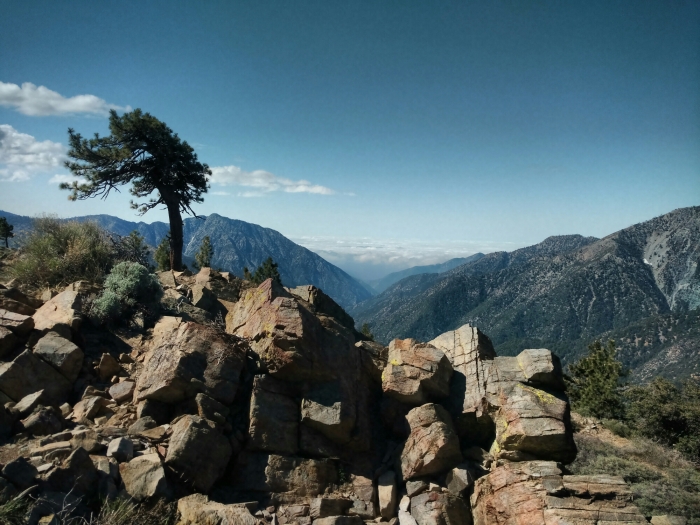 The trail was beautiful this morning. We walked through a tall pine forest, with views of Mt. Baldy, Baden-Powell, and the desert below. We passed a couple of school groups, who asked us some questions about what we were doing. Some of the kids were pretty surprised that we were walking from Mexico to Canada. Maybe we inspired a future thru-hiker!

We stopped in the parking lot at the base of Baden-Powell to energize ourselves with food before the big climb. I had oats with peanut butter and fresh banana again, soooooo good. The climb to the summit was only about 4 miles, but we ascended almost 3000 feet in elevation on steep switchbacks. It was tiring, but the weather was great for it. It was warm but not too hot, and there was a mix of sun and cloud so we alternated between warming up and cooling down. I stopped pretty frequently to catch my breath, but my legs felt good and strong. 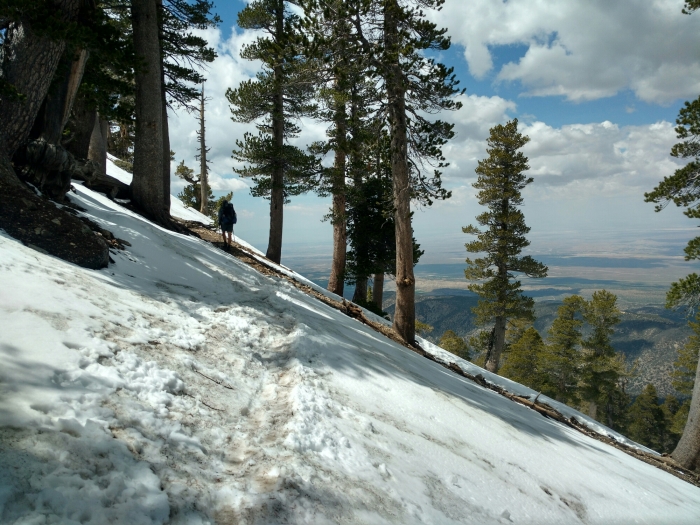 About a mile away from the summit, we started encountering some snow. We all got rid of our snow equipment after San Jacinto, so we were a bit worried, but it turned out fine. There was never really a point where the trail became consistently covered with snow, it was on and off all the way to the top. Walking on the snow was actually really fun. I enjoyed all the hiking today so much. It just felt so good to be back out here. 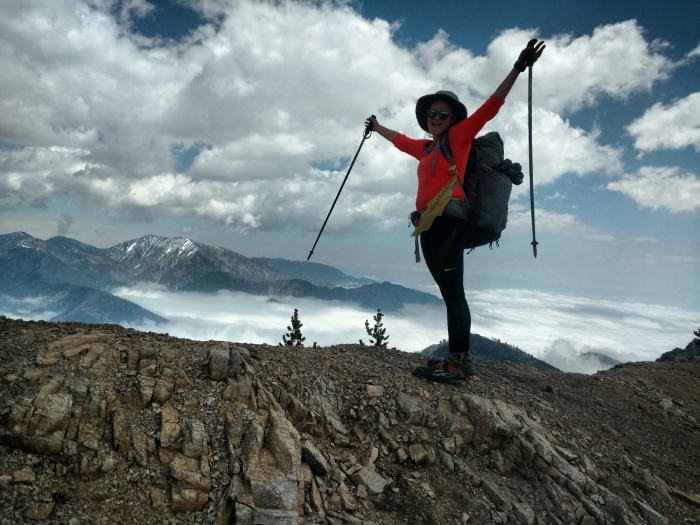 Just before the side trail to the summit, we came across the most amazing view. We could see snowy Mount Baldy across the way, and underneath a sea of fluffy white clouds. It was incredible. We scrambled up the couple hundred metres to the summit, and sat down to eat. After so much breakfast food, I wasn’t really hungry, so I just grazed on snacks. While we were sitting there, we noticed some angry-looking grey clouds blowing toward us. Suddenly, the wind began to blow and the temperature dropped dramatically. Uh oh. 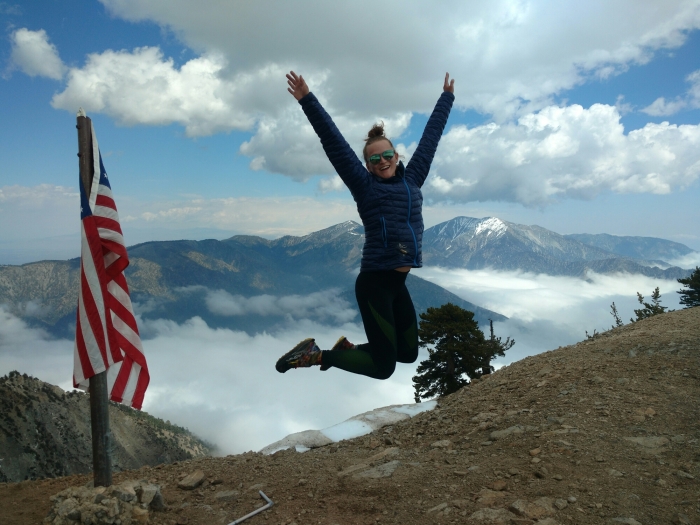 We gathered our things and headed down off the mountain. The section of the PCT after leaving the mountain was actually the snowiest, and microspikes may have been useful but we all did fine without them. Not long after we started hiking, rain drops began to fall. It was only a light rain, but we stopped to put our rain gear on. Soon, the rain changed to snow. Cougar and Dr. McDirty found out that hiking in the snow is somewhat less enjoyable than watching it from the other side of a window. Luckily, it didn’t last long and the skies were soon clear again.

The afternoon hike was beautiful too. We spent pretty much the whole day in a pine forest, which made me so happy. It smelled incredible all day long. At one point, we were walking along a ridge and to the right were views of the green mountains and flat desert below, but to the left  was nothing but a sea of white clouds. Eventually, I started to regret not eating a real lunch, and I was feeling a little hangry. But after taking a few deep breaths, and filling my lungs with the good mountain air, I immediately felt better. Still hungry, but not hangry. 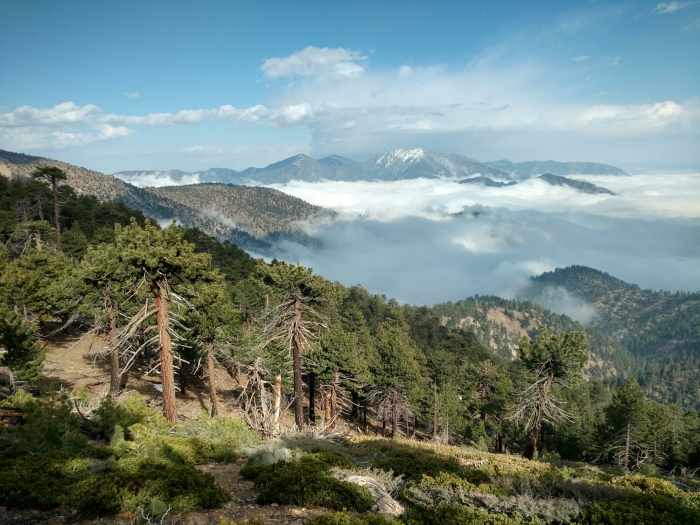 Just before camp, we gathered water at Little Jimmy Spring, a magical pipe protruding from the mountainside, from which cool, clear water was flowing. We are camping at Little Jimmy Campground, which is a massive trail camp with toilets, picnic tables, fire rings, and a ton of flat ground for tents. There are a ton of people camped here tonight. I didn’t count the tents, but there are a lot. The four of us sat at a picnic table to make dinner. Since I never ate a real lunch, I had a double dinner of an avocado cheese wrap, and a peanut butter ramen. It was sooo good, and had all the fats, so hopefully will keep me nice and warm tonight. It’s pretty cold up here, so I hope I can get a good night’s sleep. I’m super happy to be back in my little tent, bundled up in my cozy quilt. Town is nice, but this is home.