Today was a long day. I slept really well again, even though a truck was banging around in the parking lot at some point on the evening. When I woke up, my tent was soaked with condensation. 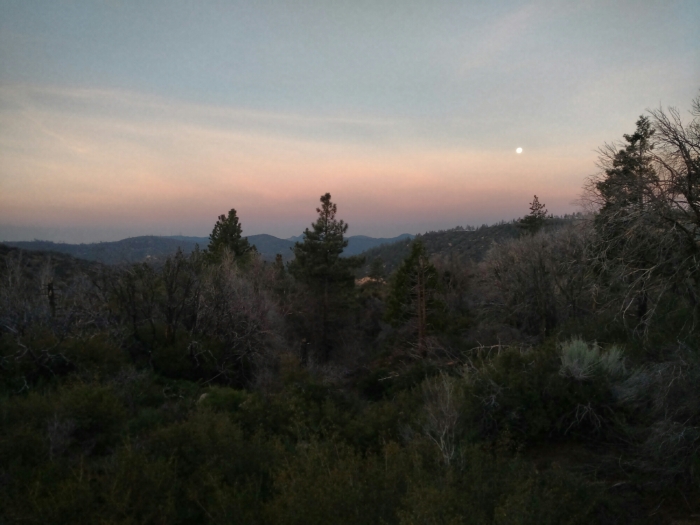 I started hiking just before 6:30. We were still in a burn area, and there was a ton of poodle dog bush around the trail. Poodle dog bush has to be one of the easiest plants ever to identify. Early in the trail, we kept thinking we might be seeing it, asking “is THAT poodle dog bush?”. No. You know poodle dog bush when you see it. It looks like some kind of evil alien plantform come to colonize the earth. Pretty unmistakable. 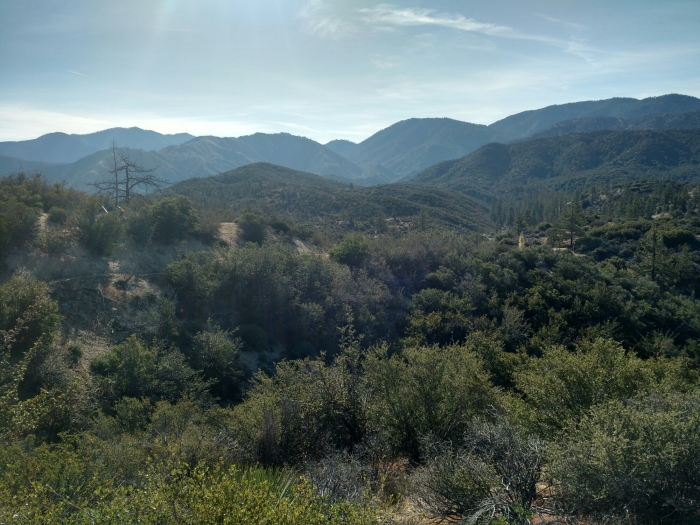 As I walked, I thought about how I’ve been on the trail for an entire month. In a way it seems like it’s flown by, and in a way it feels like the southern terminus happened a lifetime ago. What’s changed in the past month? My hair’s a little longer, my skin’s a little darker, my level of hygiene has decreased dramatically. I assume I’m physically stronger but that’s been difficult to notice. I’m much more prone to striking up conversations with complete strangers. I sleep better on the ground than in a bed. I already feel myself becoming a wild animal, and there are still 4 months to go. 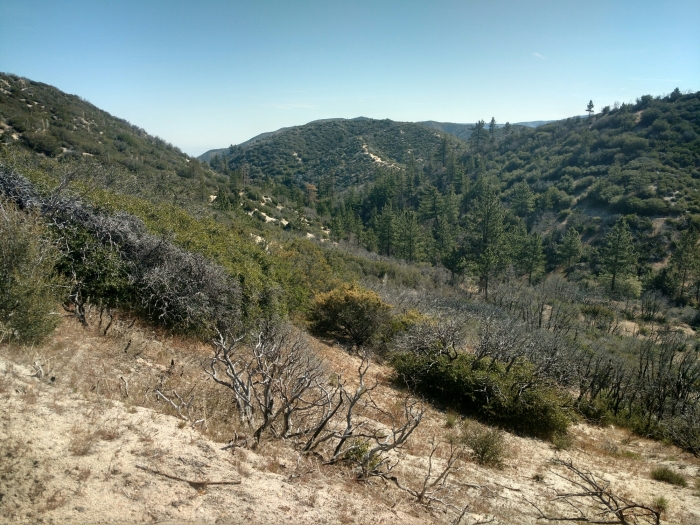 I’ve only been hiking for a little over an hour when I reach the first water source of the day. I stop, and sit on a rock to eat my breakfast while listening to the babbling of the creek. I collect a bit of water. As I’m leaving, I see Cougar and Dr. McDirty approaching the stream! I’m so happy they caught up to us. I keep walking. The smell of the fresh morning air stirs up a cocktail of vivid memories in my mind. Early morning hiking on solo backpacking trips, camping trips with family and friends, summer weeks spent at the cottage as a child. I’ve always been a morning person. 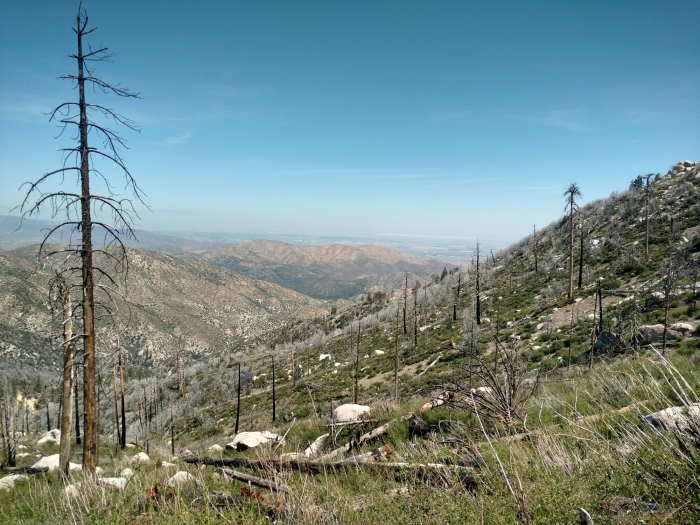 Sometime in mid-morning, tragedy struck. It had started getting hot, so I put on a podcast to distract myself, but a tree grabbed the cord of my headphones and ripped them out of the jack. When I plugged them back in, they no longer worked. I caught up to Gummies, tried his headphones, and they also didn’t work. Shit. I’d managed to damage the actual mechanism of the headphone jack. I’m going to try looking into Bluetooth headphones, and I really hope I can find something, because not being able to listen to anything for the rest of the hike would seriously suck. 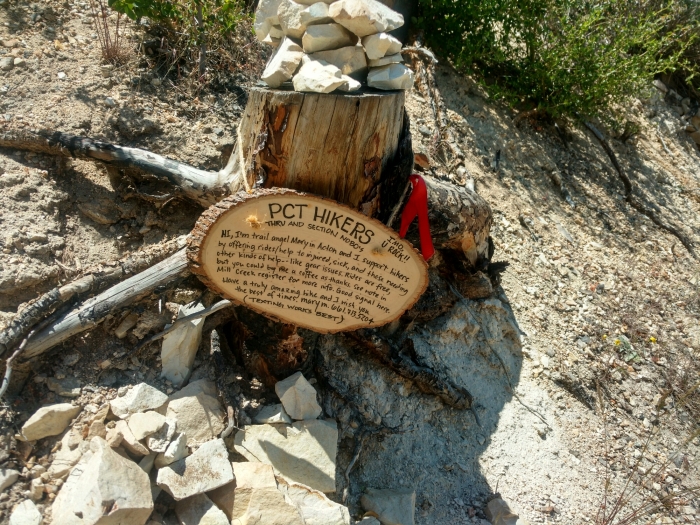 I stopped to collect water at another small stream, and then decided to crush the rest of the miles to the Mill Creek Fire Station for lunch. It was a bit far, but was all downhill so I thought I could do it. I caught up to Gummies chatting to the Canadians (Katie and Strongback), who we hadn’t seen since Big Bear. Gummies and I hiked together the rest of the way to the fire station. When we got there, I exploded my pack all over the place and laid out my tent and sleeping bag to dry. Then I ate. There were a ton of hikers there, and time seemed to cease to exist as we all sat around a picnic table talking, laughing, and eating. I seriously don’t know how long we sat there. After we had been there a while, Cougar and Dr. McDirty showed up, so we stayed a little longer so we could talk to them for a bit. I was planning to camp at a spot called Big Buck Trail Camp, and Cougar pointed out that there were conflicting mile markers shown for it on Guthook and the water report. It seemed weird, but I said I was sure it would all work out. We all hiked out together. 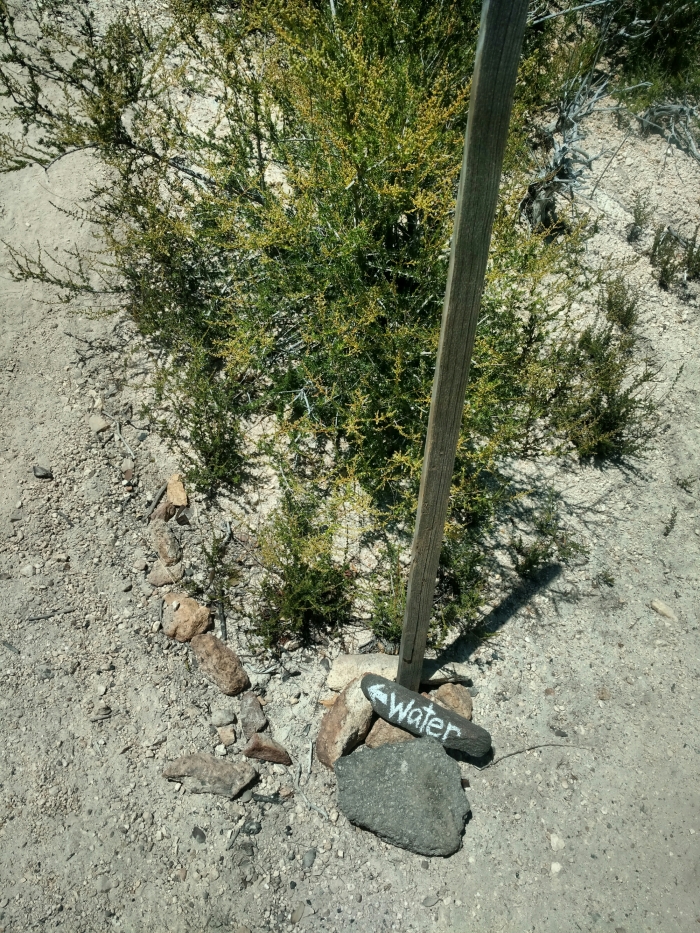 There was a big climb out of the fire station, but the gradient was so nice that I barely noticed we were climbing at all. We climbed up into the hills, and there were amazing views of the desert below. We were still in a burn area, but would occasionally pass through these lush, shady green areas that reminded me of The Shire. It was a nice hike, and the time passed quickly. After a while, we arrived at Big Buck Trail Camp, and things did not look good. There were some small semi-flat spots, but it definitely wasn’t a trail camp. It was an exposed slope covered in both standing and fallen dead trees. Gummies and I had lost Cougar and Dr. McDirty at this point, but knew they had been aiming for this camp spot too. We stood there for a few minutes, wondering what to do, and then hiked on. 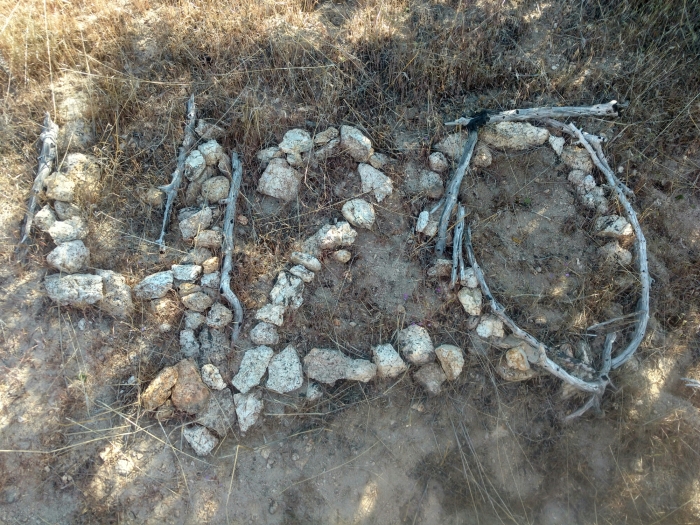 We quickly came to a trickle of a stream beside a dirt road, with a patch of flat dirt beside it. We debated camping there, but there was a large dead tree right beside it, and the road was clearly driven on fairly frequently, both of which kind of freaked me out. It just wasn’t a very nice spot. But it was already 6pm. We debated for a while, and decided to hike on. There was another stream just under a mile away that was supposed to have better flow, and on the water report, that location was marked as the actual trail camp, which gave us a glimmer of hope. As we approached the stream, that hope was quickly dashed. There was absolutely nowhere to camp. But at least there was water! We filled up, and stuffed ourselves with snacks. It was almost 7pm by the time we started hiking again, now ready to crash at the next moderately flat piece of ground we found. 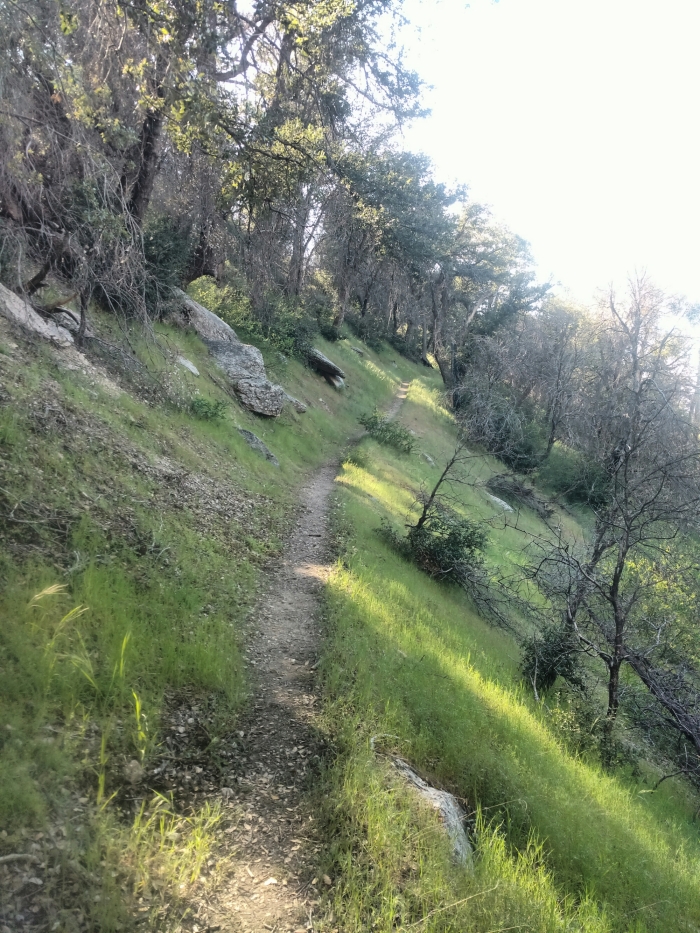 Of course, we were stuck hiking on a steep ridge for the foreseeable future. On top of it all, the trail was totally overgrown with brush that we had to push through, trying to avoid the poodle dog bush that occasionally appeared in amongst the other foliage. I was trying to keep my spirits high, laughing at the situation and telling myself “the trail provides”, but I was starting to get pretty worried. The next official marked campsite would make for a 27 mile day, and would have us hiking til around 9pm. Suddenly, we rounded a corner and saw a bit of saddle in the ridge, and… There was a person up there! And a tent! Joy! We scurried over, and found that the area was a bit off trail. We climbed up and found a road and a ton of flat ground. And about 5 tents already set up. The amount of relief I felt was unreal. 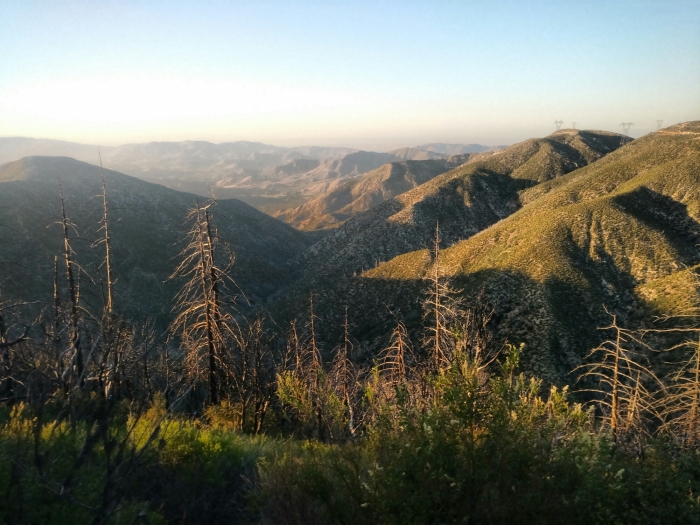 We set up for cowboy camping, too exhausted to pitch our tents. I made a monstrous creation for dinner, and it was delicious. I mixed a cheddar broccoli rice side with some real cheddar cheese and a hot buffalo flavoured tuna packet. So good. I sat in my quilt while I ate, and it was glorious. While I was eating, I saw two headlamps bobbing along the ridge. I flashed my headlamp a bunch of times to let them know where we were, and soon, the Canadians arrived in camp! They were just as happy as we were to have finally found a spot. 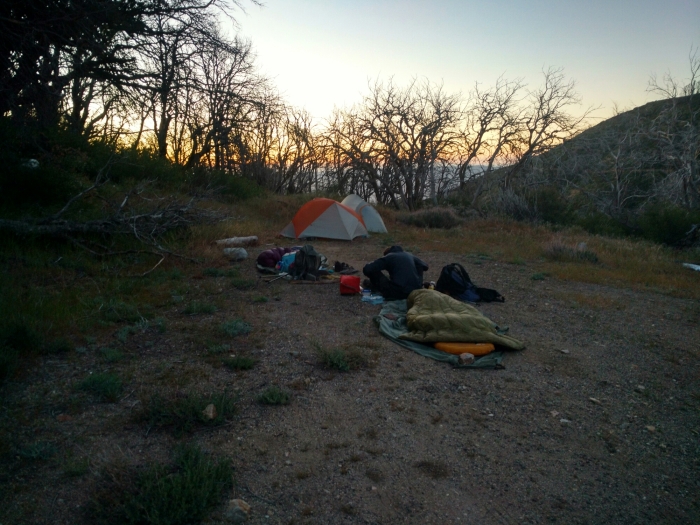 Sorry for the overly lengthy post, but like I said, it was a long day. It was officially the longest I’ve ever hiked in my life. Tomorrow I’m going to let myself sleep in, because we now only have a little over 17 miles to the Acton KOA, where I’m definitely crashing tomorrow night. They have showers, a convenience store, WiFi, and a POOL. Hopefully after the stress of today, it will be a nice, relaxing day.