I think the desert was angry at us for trying to leave it this morning. We woke up to find that there had been an extremely heavy dew overnight, and everything was soaked. Fair enough, I guess cowboy camping in the bottom of a river valley wasn’t the greatest idea we’ve ever had. On the upside, the stars were absolutely gorgeous last night. And no one got snuggled by the rattlesnake. But some creature had nibbled on Gummies’ Snickers bar at some point in the night. Welcome to the Sierras, I guess.

We started hiking a bit before 6, and the morning light was gorgeous as it shone on the walls of the valley and the waters of the river. Eventually, we emerged into a wide open meadow with mountains on all sides. Suddenly, the realization that we were actually leaving the desert and entering the Sierras really hit me. It felt so exciting. We passed the 700 mile marker, and soon we were on the road to the Kennedy Meadows General Store.

When we walked up, the people waiting for the shuttle to the restaurant all clapped for us, which felt pretty awesome. We exploded all of our dew-soaked gear into a patch of sunlight, and were able to hitch a ride to the restaurant at Grumpy Bear’s Retreat, skipping out on the packed shuttle. The restaurant offers a breakfast that comes with eggs, potatoes, bacon, and “all-you-can-eat pancakes”, except the pancakes are so huge that I couldn’t even finish one. They also let me replace the bacon with extra eggs, so I had four eggs and probably two entire potatoes. It was insane. 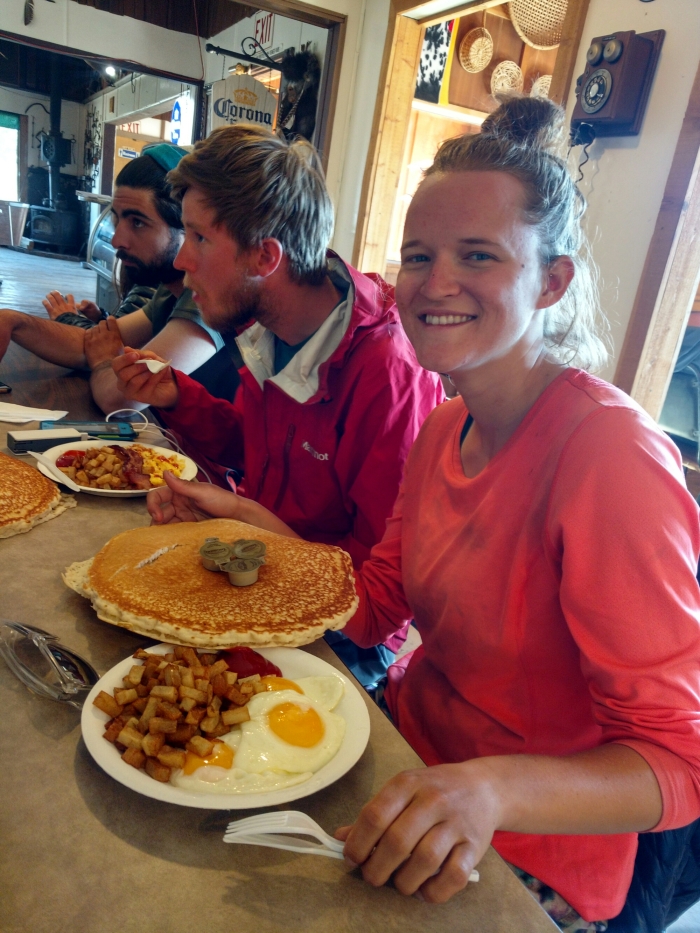 Shamefully defeated by a pancake for the second time on trail…

We caught the shuttle back to the general store, packed into the back of a pick up truck with a bunch of other hikers. We spent the rest of the day hanging out on the porch store, sorting our resupplies and new snow gear, and drinking beers. We got to shower in outdoor stalls, which felt super good. I got a burger called the “pineapple express”, which had grilled pineapple, cheese, onions, and BBQ sauce on it. They made it on a veggie patty for me, and it was incredible. 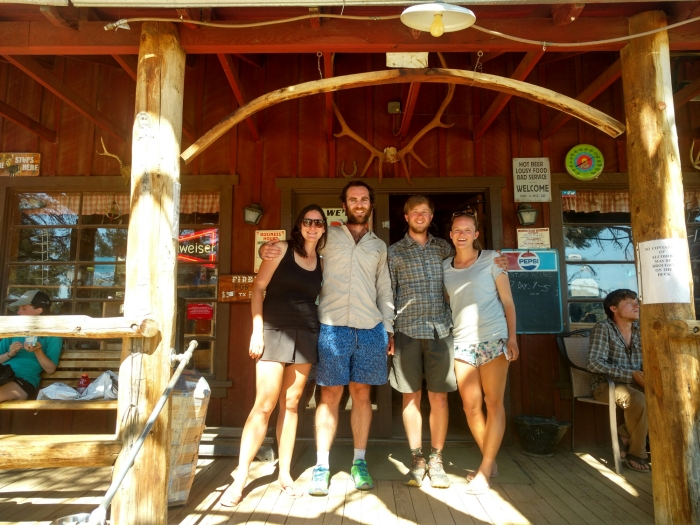 After a full day of relaxing, we finally managed to get ourselves up and moving to hike a few more miles. My pack felt pretty heavy on the hike out, newly weighed down with my microspikes, ice axe, and entirely too much food. It was also hot, and sweat was dripping even though it was just a short, flat hike. In a few miles, we reached the Kennedy Meadows Campground, and set up for the night. Tomorrow, we’ll enter the South Sierra Wilderness and climb up to 9 or 10 thousand feet. We’ll probably be hitting some snow once we get up high enough. I’m excited and a bit nervous for my first true taste of the Sierras. It’s really happening. We’re done with the desert.