Last night was a rough night. The wind picked up off the lake and blasted the tent all night, and I think the altitude was affecting me a bit because I felt a bit dizzy and short of breath. Between those two things, I didn’t get much sleep. The alarm went off at 4, and I made myself start bundling up for the hike out. This is definitely the point where the trail becomes more of a mental test than a physical one. I mean, you’re definitely still doing things that are physically difficult, but getting out and hiking at 4am in the cold and dark and dealing with the miles of snow definitely takes some mental strength. 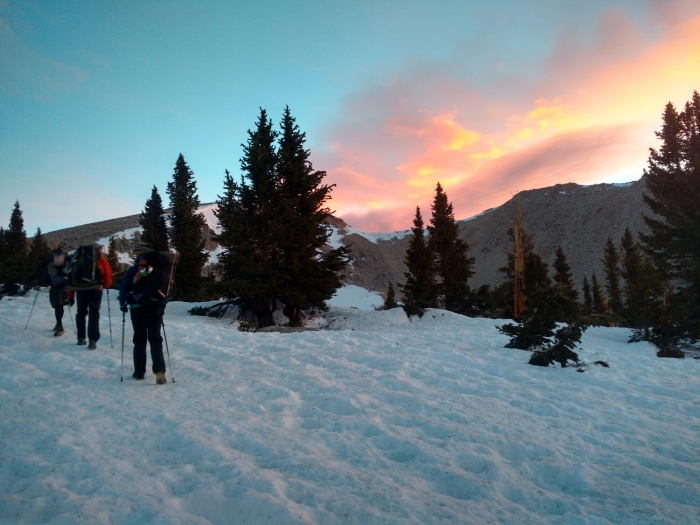 There are some perks to getting up at an ungodly hour though. As we climbed above the lake, the sky was lit up by the most gorgeous fiery sunrise. The snow-capped mountains all around were bathed in a pink glow, with a backdrop of bright pinks and oranges. It was amazing. After climbing up the snow above the lake for a bit, we actually had some dry trail, which was pretty exciting when we were well above 11,000 feet. It didn’t last long though, and soon we were traversing over snow once more.

It’s really hard to stay on the actual trail when it’s covered with snow, so most of the morning involved us following footprint trails or picking our own route across the landscape. The morning was cold, but eventually the sun’s rays reached us and it started to warm up. We stopped for a quick break on a dry patch of ground, where I definitely fell fast asleep and ended up staying there for almost an hour. Our pace on the snow is insanely slow, something close to a mile per hour. We had hoped to camp at Guitar Lake tonight, to set ourselves up to summit Whitney tomorrow, but that was quickly seeming impossible.

About ten miles into the day, we had our first real Sierra creek crossing at Rock Creek. It looked pretty intense, and we started scoping out possible places to cross. The creek ran through a meadow about a half mile upstream from where the trail was officially supposed to cross, and we decided that would be the best place to make our ford. We picked the spot where the flow looked calmest and stepped in. It wasn’t as deep as we were anticipating, only around mid-thigh level, but it was freaking cold. We all crossed together, and my legs and feet were definitely glad to be out on the other side. We rewarded ourselves with a lunch break in the warm sun of the grassy meadow.

The crossing at Rock Creek

After that, there were still about 6 miles to the Whitney spur trail, which we had decided would be a more realistic place to camp than trying to make it another 4 miles up the side trail to Guitar Lake. There was a big, difficult climb up from Rock Creek, but luckily the trail was totally dry. We had another crossing at Guyot Creek, but luckily this one was small enough that we could just jump across. At this point, Cougar and Dr. McDirty told us that they didn’t think they would be able to summit Whitney tomorrow. Cougar was really struggling with the altitude. Knowing we’d have to summit without half of our trail family was really sad, but Gummies and I pressed on to try to make it to the junction, with plans to meet them after we got down from the summit.

We finished the climb, crossed a snowy meadow with amazing mountain views on all sides, and actually had dry trail to walk on for a while. Things were looking pretty good, until we had to descend a steep, completely snow-covered north-facing slope. We somehow ended up way off trail, and had to scramble up the snow and rocks to find it again. It was exhausting, as we’d already been hiking for around 13 hours at this point. To make matters worse, Gummies slipped in the snow and ended up breaking one of his trekking poles. It just wasn’t his day.

We eventually got back on the trail, and could see the dry trail below that we needed to get to, but between us and it was a steep slope of slushy snow. There was nothing to do but go for our first glissade. It was somewhat terrifying, but ended up being really fun. Afterwards, we had to scramble over some rocks to get around another snow slope, and got to see a marmot running up the snowy hillside. His little footprints were everywhere. I seriously wish we could run around on the snow as easily as that. When we got down onto the dry trail, I could have kissed the ground, I was so happy to be off that snowy slope.

We finally arrived at the campsites near Whitney Creek and set up camp. We ended up hiking for over 14 hours. As the day had progressed, Gummies had started coming down with some kind of chest congestion that kept getting worse and worse. By the time we got to camp, it was pretty bad, and we made the decision that Whitney just wasn’t going to happen. It’s a little disappointing that we won’t get to summit, but I don’t feel super comfortable going up alone, and it just wouldn’t be the summit I wanted if I wasn’t with my little trail family. The mountain will always be there another time (and probably with a lot less snow on it). Cougar and Dr. McDirty should pass by our camp sometime tomorrow morning, and then we can make a plan for how to progress. Gummies might have to get off trail for a bit if he doesn’t get better, but we’re in a pretty remote spot without a lot of convenient bail-out points. The trail giveth, and the trail taketh away.