I know this is probably the third or fourth time I’ve said this, but last night was DEFINITELY our coldest night yet on trail. I woke up to shoes that were frozen solid and hard as rock. The water bottle that was inside my tent was slushy and the one outside was solid ice. If you’ve never had to force your feet into frozen shoes at 3:30am in preparation for climbing up a snowy mountain pass, you should probably just take my word that it’s an interesting experience. Unless you’re the kind of crazy person that likes doing that kind of shit for fun. Then you should probably hike the PCT. 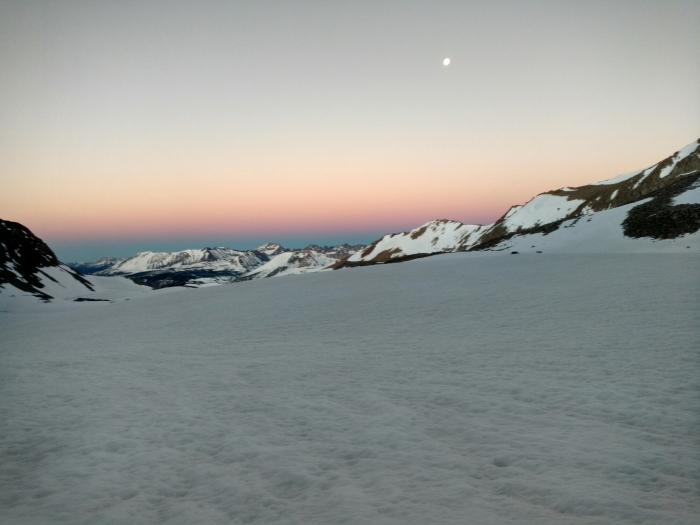 After we had finally all gotten our feet into our shoes, we trekked out into the vast snowy darkness. We followed foot prints for a bit, and then just cut cross country across the snow to where we could see the pass rising up in the distance. The moon was almost full, which illuminated the snow and surrounding mountains in a light glow. When we reached the pass, a steep wall of snow rose up in front of us, without a path in sight. The first light of morning was starting to touch the mountains now, the sky lit in pastel blues, pinks, and yellows.

Approaching the pass. We have to climb up the steep wall of snow to get to the dry trail on the rocks above, which leads to a crossing of the snow chute on the left. The photo doesn’t capture the steepness.

Suddenly, I spotted a set of footprints switching up the wall of snow! We were able to follow them all the way up to where the trail became dry on the rocks far above. It was pretty exhilarating climbing up the snow wall. The view was incredible as the sun continued to rise. I felt amazing, and my body didn’t even really seem to notice the altitude. When we reached dry trail, we switched up a few times to the much talked-about snow chute that you have to cross to reach the top of the pass. There was a good trail already cut into the snow, and it really wasn’t all that scary. The rest of the climb was way scarier in my opinion. 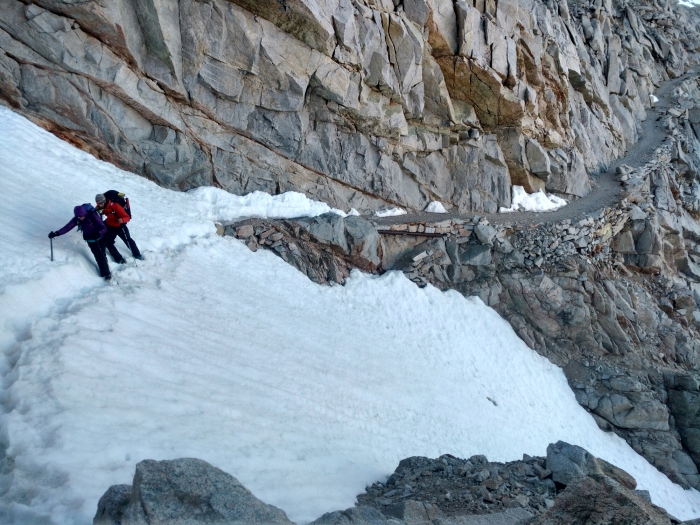 After the chute, we had just a few more dry switchbacks until we were at the top! 13,200 feet, the highest point on the PCT. It felt amazing to have actually reached that point. We all got a bunch of photos at the top, and then started the descent. We entered King’s Canyon National Park when we crossed the pass, and the view of the mountains on the other side was even more incredible. We trekked along a snowy slope, and it seriously felt like I was walking through Middle Earth. 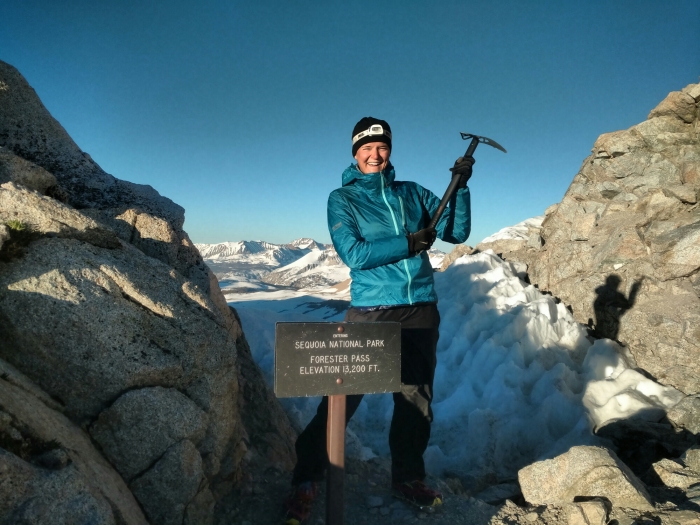 The trail went down into a valley, and luckily we had good foot print trails to follow for almost the entire day. The valley was filled with downed trees and debris, it looked like an avalanche had blown through and wiped everything out. With the tracks to follow and our early start, we were making amazing time. I kept thinking to myself that this was definitely our best day in the Sierras yet. We stopped for a break on a rock and made some hot chocolate. It was just such a great morning. 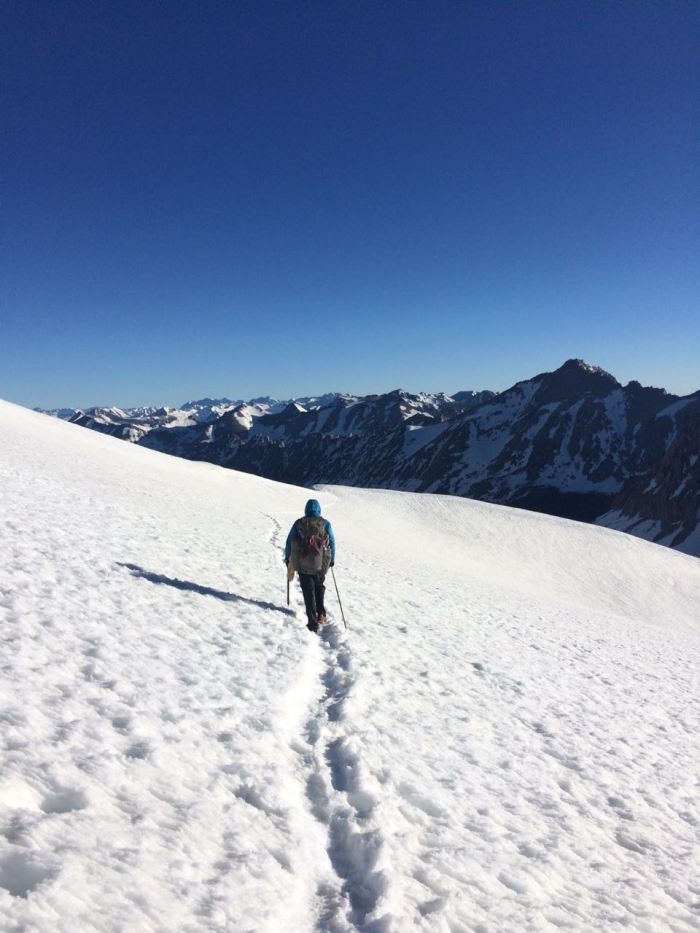 We walked on a bit further before stopping for lunch. I laid out in the sun and definitely fell asleep again. It felt so good. After lunch, we only had 2 and a half miles to our planned camp spot. We were down in the bottom of the valley now, and streams were flowing everywhere and the ground was quite wet. We ended up having to cross a stream and get our feet wet. We had to climb up about 1000 feet out of the valley to get to camp, and at the bottom of the climb we actually managed to find dry trail, which was super exciting. Not so exciting were the threatening-looking grey clouds that had started to blow over the mountains into the valley. We hurried to get to camp in case inclement weather was on the way.

The climb was pretty tough, there was a lot of dry trail, but also a lot of scrambling over slushy patches of snow. When we reached the campsite, the whole thing was covered in snow. We scoured the area for any patches of flat, dry ground, but there was nothing. With a storm possibly on the way, there was nothing to do but pitch our tents on top of the snow. First, we laid down beds of dead pine needles to hopefully stave off the cold of the snow at least a little bit. Pitching my tent in the snow was interesting, since it’s not freestanding. I had to cover the stakes with rocks and basically bury them in snow, and I’m a bit worried I won’t be able to get them out of the frozen ground tomorrow.

I got the weather forecast on my InReach, and it was pretty scary looking. There’s only a 20% chance of snow, but usually if it forecasts anything above 0%, it happens. Also, the temperature overnight was forecasted as – 3 degrees Celsius. The InReach tends to overestimate the overnight temperature, and has never shown a temperature below freezing before, even though we’ve definitely had freezing nights before. It’s definitely going to get COLD tonight. Once my tent was sufficiently pitched, I changed into almost every article of clothing I own. I have on two pairs of socks, my hiking tights, thermal tights, rain pants, thermal top, hiking shirt, fleece, puffy, rain coat, beanie, and buff. Hopefully it’s enough to keep me warm tonight. It’s only 6pm and still light out, and things are already starting to freeze.

It was so cold out that once I was in my tent, I didn’t want to get out, so I sat inside and cooked my dinner in the vestibule. I left the pot of pasta to soak in the cozy inside my tent, which turned out to be a fatal mistake. It tipped over without me noticing, spilling the entire pot of cheesy sauce inside my tent. I had to sacrifice my bandana and a ton of toilet paper to wipe it up. My tent probably reeks of cheese now, so hopefully there are no hungry bears around tonight. Between having to sketchily pitch my tent on snow with a potential storm coming, the thought of freezing overnight, and the pasta incident, I was having a pretty crappy night. The day had gone from amazing to shit in just a couple of short hours. I tried to keep spirits high and laugh at the ridiculousness of the situation, but it was pretty hard. On the bright side, Cougar and Dr. McDirty said that if my tent collapses in the night I can come spoon with them in their tent. So at least I won’t die. Probably. Unless I get eaten by a bear that’s hungry for cheese sauce.

Tomorrow, we’re getting up early again because we have to cross Kearsarge Pass to get down into town. I really hope the weather stays decent, because I really don’t want to get stuck here waiting out a storm. I really have to pee right now, but I also really don’t want to leave my warm quilt. More tomorrow, if I make it through the night!