Today was a bit of a crazy day, with lots of ups and downs both physically and emotionally. We got up and started hiking, and the morning trail was really nice to begin with. There was a bit of snow to contend with, but mostly dry trail through the beautiful Northern California forest. We eventually came to a steep climb where snow had consumed most of the switchbacks, so we ended up mostly freestyle  scrambling up the face of the ridge. At the top, we were faced with crossing a steep snowfield, so we decided to quickly break for breakfast at the top with an incredible view. 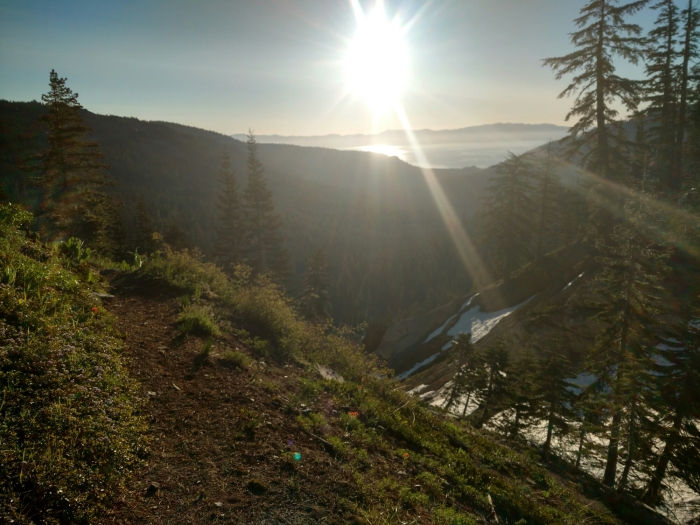 At first glance, the snow we had to cross didn’t seem to require getting our ice axes out, so we kept them packed away. Of course, it soon became quite steep, and Gummies ended up taking a pretty big fall where he slid 20 feet or so down the slope. Thankfully, he was able to self arrest using his trekking pole, but it was a pretty jarring experience. Luckily, the snow ended just afterwards, and we were able to cruise along a great ridge walk with a ton of dry trail. The views from up on the ridge were totally gorgeous, exactly how I imagined Northern California would be. 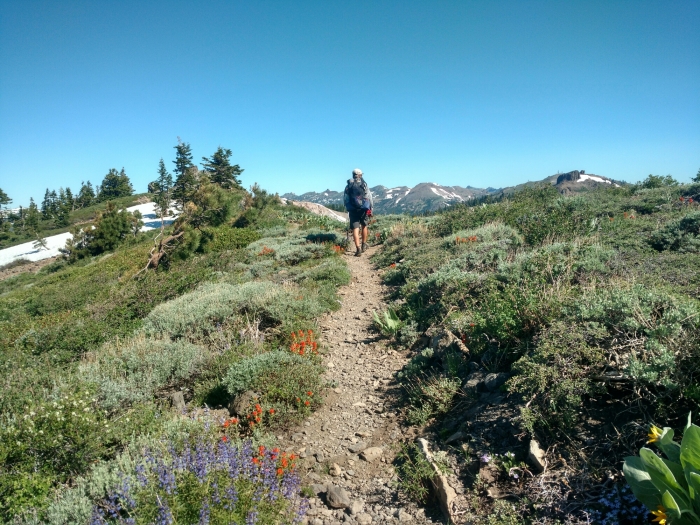 But of course, the dry trail couldn’t last forever, and we were soon traversing across snow again, as we walked through a ski area. Again, the slope didn’t seem steep enough to warrant getting our axes out, but became fairly steep partway through. A second trekking pole self arrest by Gummies left us thoroughly shaken as we arrived at the point where the trail began a steep descent along a forested, snowy slope. We decided to stop for lunch first to gather our wits, and collapsed into a tree well where there was dry ground. 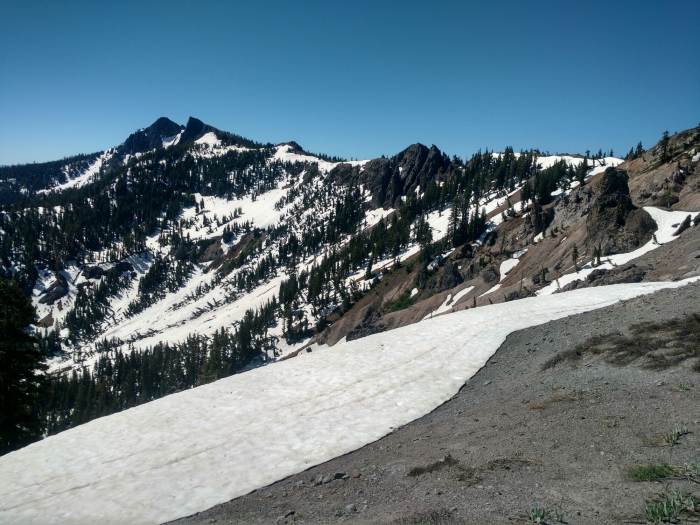 After we had eaten and rested, we prepared to tackle the descent. Luckily, there was enough dry ground that we were pretty much able to hop dirt patches all the way down, which made it much less dangerous. We crossed a creek at the bottom of the ridge, and then had dry trail to hike through the sunny forest for quite a ways. It was really nice for a while, and then the snow was back. The on and off snow was really starting to wear on me mentally, and I was starting to get pretty frustrated with the day. A few deep breaths of mountain air and some music got me starting to feel better again, plus the snow hiking was pretty easy since it wasn’t very steep and Cougar and Dr. McDirty had left us some nice tracks to follow.

We were crushing it until we got to the top of the Squaw Valley ski area, when the trail suddenly approached and descended a steep slope of death. We had been making decent time for most of the day, but at this point our pace suddenly decreased to that of an elderly snail. It took forever to slowly pick our way down into the valley, where we then had to traverse around the edge of a steep ridge. It was pretty nerve-wracking, especially after the falls Gummies had taken earlier. I fell twice during the traverse, but didn’t slide very far either time. Still, we were both pretty done with the day when we finally found a patch of dry, semi-flat ground where we could perch the tent on the side of the ridge. 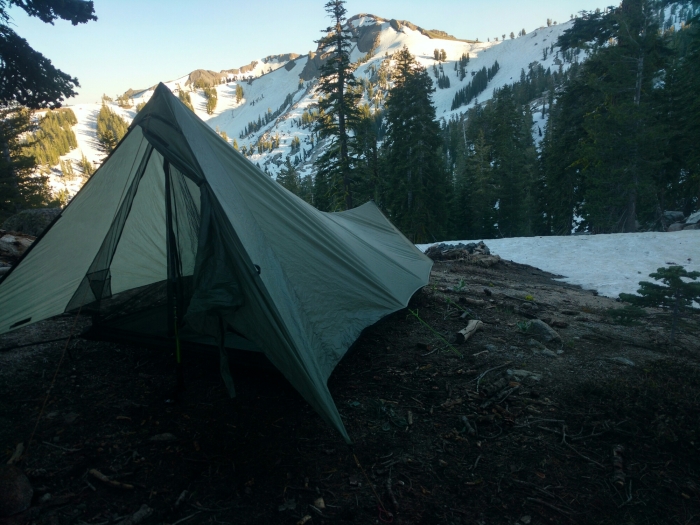 The view from camp was really cool. We could see Lake Tahoe in the distance, as well as some of the Squaw Valley ski hills (which were actually in the process of being groomed). We made dinner and headed to bed right away, exhausted from the day’s events. Here’s hoping the trail will be kinder tomorrow.

One thought on “PCT Day 80: NorCal Views and Slopes of Death ”