We had a proper trail lie-in this morning, which I desperately needed after my illness episode yesterday. We only had a little over 8 miles to town, and we knew we couldn’t check into our room until 2pm, so we took our sweet time getting out in the morning. We even ate breakfast in camp and I made myself a big pot of hot coffee. So good. It was a little after 9 by the time we finally started hiking. 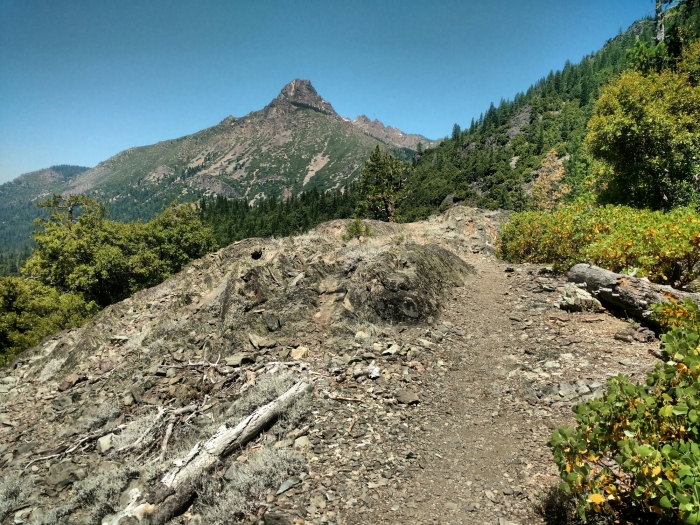 The trail was really nice today. It mostly wound down the ridge through the dry coniferous forest, but every once in a while it would emerge from the trees to give us stunning views of the surrounding hills. I really love walking in the forest. I listened to a podcast from one of my favourite yoga teachers, and afterwards walking through the trees felt like a moving meditation.

I did have to stop and take the scariest poop of my life shortly before reaching town. The ground dropped steeply away on both sides of the trail, so I was perched on an insanely steep slope with a raging river just below me that I would probably drop into if I slipped. Glad I made it back to the trail safely, because death by pooping is not the way I want to go out.

When we reached the highway, we found more trail magic! Two days in a row! There were two bins filled with beer, chips, and peanut butter cups. So amazing. After we finished drinking beer in the dirt, we started slowly walking down the highway towards town, trying to get a hitch even though it was only 1.5 miles away. We didn’t get too far before a guy pulled over to give us a ride. His young son was in the car with him, and he was telling us about how they had just climbed Mt. Shasta and were going to do Whitney next. We started trying to give him some advice, since we were just in the area, and he said “Oh, I’ve climbed Mt. Everest.” Oh. Okay. He was super chill about it, but how cool is that?!

Town is super tiny, and almost everything was closed or for sale. Luckily the general store was open, and we spent a long time loitering on the porch eating snacks and trying to use the mediocre wifi. Eventually, we walked down the road a bit to find our accommodations for the night, which turned out to be a cute little cabin along the Yuba River. I had my first shower in 8 or 9 days, which obviously felt incredible. Unfortunately, laundry service doesn’t seem to be a thing that exists in this town, so our clothes might just have to retain their filth until our next stop. I did at least try to wash some of the more… delicate items in the sink.

After being lazy for a while, I went up to the reception area to try and use the WiFi to talk to my parents and get my back load of blog posts up. It was pretty slow, but I was able to get most of it accomplished. The resort has a super expensive restaurant, which seemed to be the only place to eat around here that was actually open. I was thinking about just cooking up some of the ramen I had left from this section, but Gummies really wanted real food, so I went into the restaurant to sit with him and maybe share a dessert. The waitress definitely seemed a bit weirded out that I wasn’t eating (it was a pretty nice place, and most of the other customers were older people out for a nice Fourth of July dinner), and when she brought the food she brought an extra loaf of bread for me. She also brought him extra soup, “just in case we were sharing”. She was so nice. Everything was really good, but we got a blackberry cobbler with ice cream for dessert, which was freaking amazing. After dinner, we loitered in the lobby a bit longer until they started trying to close the place down, and returned to our cabin to fall into bed.