We got a slow start this morning. We let ourselves sleep in a bit, then Gummies ended up having to deal with a bunch of shit on the phone relating to credit cards and shoe orders. I swear there’s always something going on that makes town way less relaxing than you’d like it to be. Anyway, we finally got back on the trail around 8, and we hadn’t been hiking for long before we stumbled across trail magic! There was a picnic table with an umbrella and they left markers for all the hikers to sign the table. There were drinks and snacks too. It was fun to look for the names of people we knew and find space to squeeze in our own signatures. This was the first of many distractions that slowed us down today, and although I hate getting side tracked, it’s hard to be upset when there’s trail magic involved.

We pressed on to Burney Falls State Park, our second big distraction of the day. It was lunch time when we arrived, so we sat at a picnic table to eat, our thru-hiker spreads taking up a table that easily could have sat a dozen people. After lunch, we wandered over to the general store, where I got an ice cream cone and a cup of hot coffee. Gummies thought it was a weird combination, but I told him that by the time I was done my ice cream, the coffee would be at perfect chugging temperature (which is exactly what happened). Finally, we headed down to see the falls, which was the real reason we had taken the side trip into the park to begin with. The place was absolutely swarming with visitors, struggling to hike up the steep concrete path that lead down to the base of the falls. The falls themselves were really nice though. As you hiked down, the air got cooler and cooler, and when you stood at the base, you got a nice mist of cool water. The falls were quite beautiful, a 130-foot wall of cascading water rising up out of a deep blue pool. After enjoying them for a few minutes, we finally headed back to the PCT.

After lunch, the day became unbearably hot. We wound up through a forest and down along an exposed ridge. As if to prove how desolate the landscape was, the trail presented us with, in quick succession, a fat rattlesnake slithering off the trail, and the bleached-white ribcage of some large mammal off to our right. All the while the sun beat down, attempting to bake us in our skins. We finally arrived at Rock Creek, and scrambled down under the bridge to find a delightfully shaded area. The creek was beautiful, and after chugging some of the cold, clear water, I immediately stripped down and sat in the creek in my underwear. It was that hot, an oven-like sensation we hadn’t felt since the early desert days. Distraction number three.

Finally, after leaving the creek, we were able to get really moving. It was going on evening, so the sun was getting low, and the trail wound very gradually up through a nice, shaded forest. In the last few miles of the day, I was able to get into a groove and really hit my stride. It almost felt like I was gliding along the forest floor. Okay, so I might have stumbled on the occasional rock (I’m an incredibly clumsy person, it’s a miracle I haven’t injured myself out here). But anyway, as I was otherwise gracefully gliding along, I found myself marvelling over the hiking machines my legs have become. Here I am, on my twelfth hour of walking (okay, so several of those hours might have actually been spent sitting and eating, staring at waterfalls, or swimming in creeks, but it sounds more dramatic this way), and my legs are just cruising along, putting one foot in front of the other, as if they hadn’t just spent the entire day walking 20+ miles. It’s kind of crazy, that what used to seem like some kind of insane feat of endurance is now just… normal. Now, I’m not trying to say that this is easy. There were parts of the day that were really hard. Staggering through air that felt like it had just been released out of an oven was hard. Carrying my pack weighed down with a ridiculous amount of food and 4.5 pounds of water was hard. Getting out of bed after a crappy night’s sleep was hard. The act of walking 23 miles just wasn’t that hard. 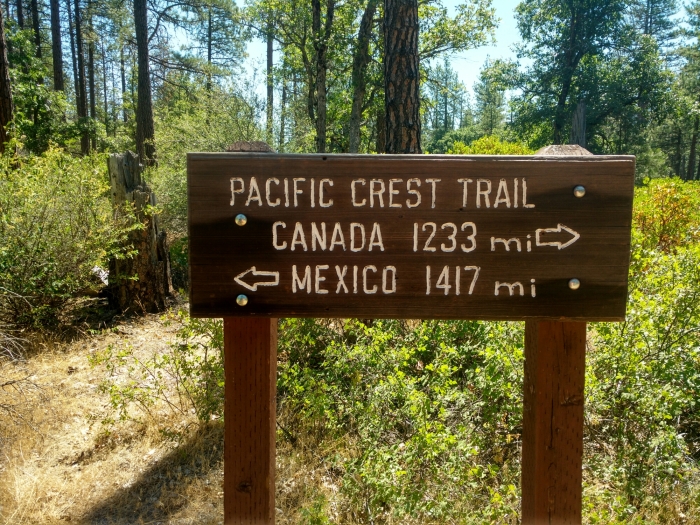 We did end up hiking past 8pm, and once we had gotten everything set up, we ended up eating dinner in the dark, before exhaustedly crawling into our sleeping bags to pass out. Hopefully, tomorrow will bring less distractions, though the trail will do as it pleases (and that’s okay).