Still had trouble waking up this morning (I think I could have slept for 12 hours), but once I shook off the sleepiness, I did feel quite rested. We started hiking, the excitement of getting to Oregon pushing us on. The trail was quite pretty this morning, still pretty smoky but not quite as bad as the day before. The soundtrack of the morning was the jingling of cow bells. We heard them through the trees all through the morning, and every once in a while we would stumble upon a group of cows munching on the grass. It’s a pretty bizarre thing to come across out in the wilderness. The morning passed pretty quickly, and soon we were approaching the Oregon border.

It was super exciting to come around the corner and see the sign and trail register at the border. At the same time, leaving California feels bittersweet. I’m so excited for a change of place and feeling like I’m making progress, but I feel like I’m leaving California with unfinished business. I missed the Sierras, which was arguably the part of California (and maybe even the whole trail) I was most excited for when I started this journey. While I know that at some point I’ll be back to finish it, leaving California without getting to see that section still hurts a bit. But anyway, I was still super happy to get to Oregon. 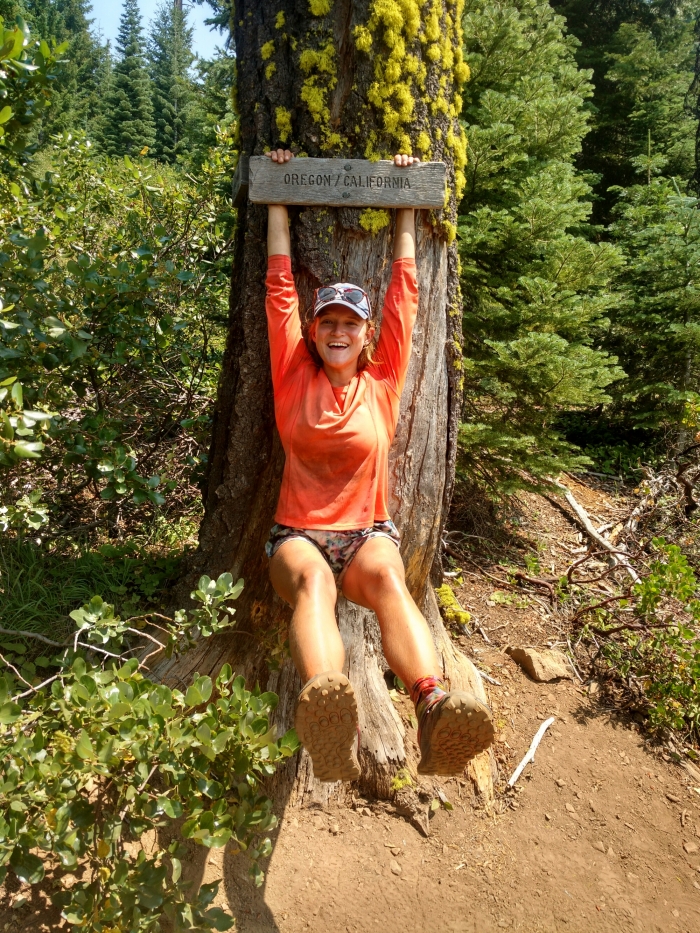 We ate lunch just over the border, and then continued hiking into Oregon, and you know what? Southern Oregon looks an awful lot like Northern California. Shocking, I know. The day was actually not too hot, which was really nice. Most of the day was in the shade, and there was a nice breeze. We did get some unfortunate news in the afternoon. Apparently, there’s a fire near Crater Lake and the trail there just closed. We’re not sure if there’s an easy way around it, so we’ll have to figure out some logistics once we get to town. We’re all really bummed that we might not get to see the lake. We arrived at a gushing piped spring, and all stuck our heads underneath it and it felt soooo good. Later, we had a climb, and at the top I laid on a rock and ate a baggy of melted peanut butter m&m’s with a spoon. We continued on, the trail winding down around the side of the ridge. A cool breeze kicked up as evening came on. The views were beautiful. 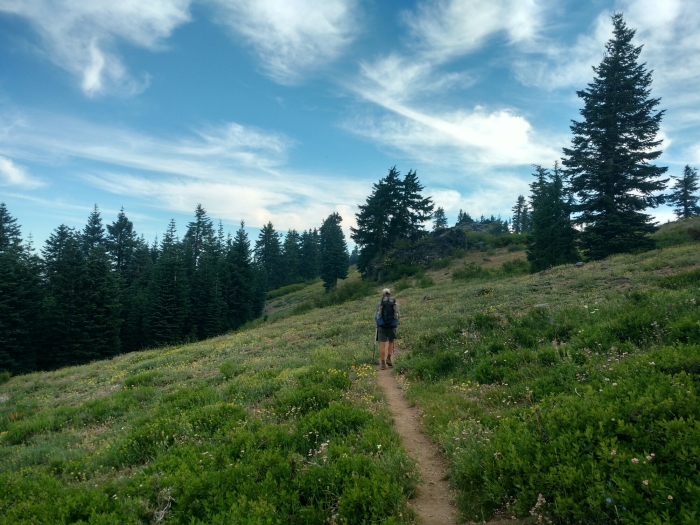 Finally, we heard the sound of a small creek through the trees that meant we were approaching camp. We’re camped with Non Stop for the second night in a row. Tomorrow we have a half day to hike into Ashland. We’re planning to stay at Callahan’s Lodge, where they have this amazing hiker special where you get camping, laundry, a shower, dinner, breakfast, and a beer. I’m sooo excited.