We were in no hurry this morning, figuring it would be difficult to get a hitch at the crack of dawn, so we got to have a nice sleep in at our lakeside campsite. It still wasn’t the best rest though, because for some reason I woke up around midnight and couldn’t fall asleep again for a couple of hours. Every time I find myself awake in the dark, my Nighttime Brain becomes convinced that there are cougars roaming around just outside the tent. I read my book for a bit to both amuse and distract myself before I could finally fall back to sleep. 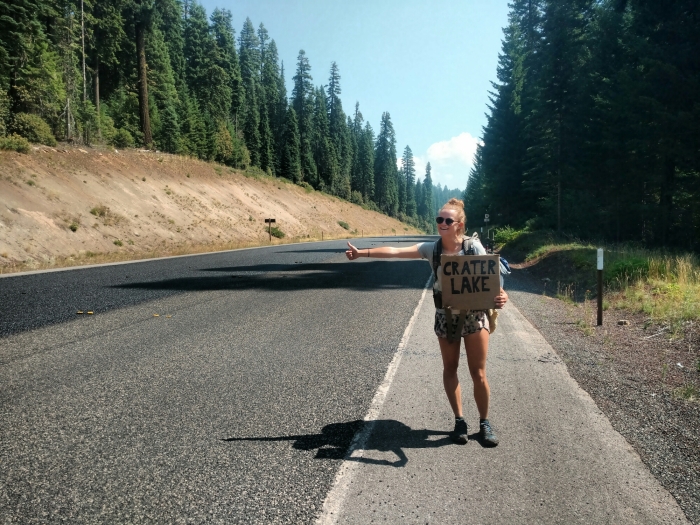 After we packed up all our stuff in the morning, we walked back over to the resort restaurant for breakfast. We sat and ate with another couple of hikers, Breakfast Beer and Wildfire, who we met on the trail the day before. It was a really fun morning of talking and laughing (and eating of course) with them. When we were done eating, we walked up to the highway to begin our attempt to hitch past the closed section of trail up to Crater Lake. It turned out to be a pretty difficult hitch, and we were standing on the side of the road for well over an hour before someone finally pulled over. It was a pickup truck with what seemed to be a father-son duo, filled with fishing and camping equipment. It turned out they were going to Crater Lake as well, which was an amazing stroke of luck for us. We had been expecting to have to take the journey in several hitches, and we’re beginning to wonder if we’d even make it to the lake by the end of the day. They moved a bunch of stuff around so we could fit inside, and we were off. It turned out to be the chillest hitch ever. The two dudes passed a pipe back and forth in the front seat and no one really talked much. They dropped us off right at the Rim Village on the side of the lake, which was amazing. 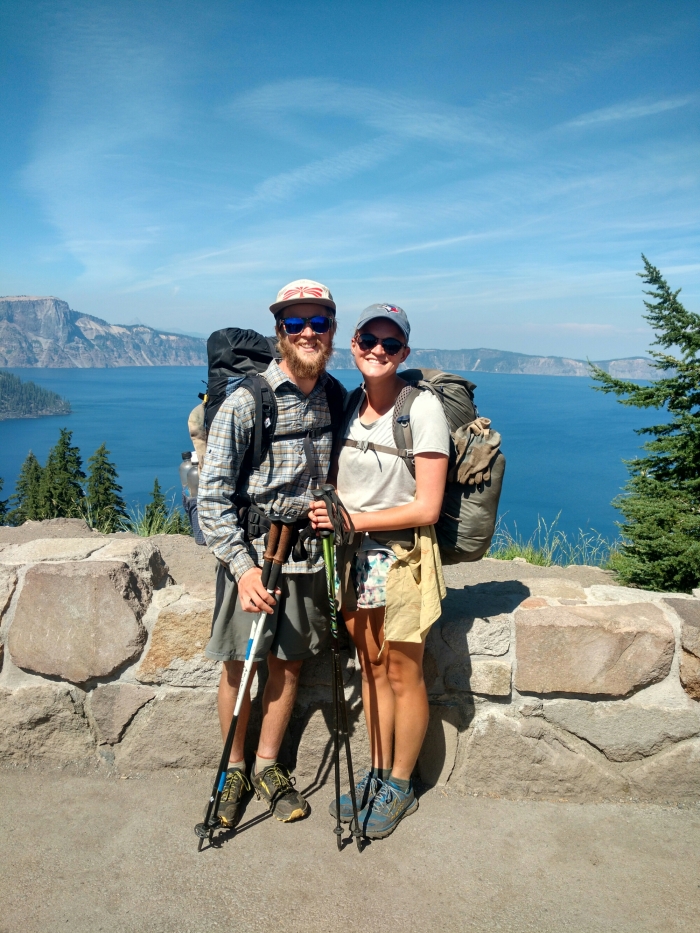 We ate an incredibly mediocre lunch from the national park cafe, and then began our trek around the rim trail. The lake is absolutely gorgeous. The views were a tiny bit hazy due to the smoke from the nearby fires, but it wasn’t too bad at all. The water was an amazing deep blue, and the cliffs all around the edge of the lake were incredible. The rim trail was a lot harder than I was expecting, with narrow winding trail and a ton of steep ups and downs. As we wound further around the west side of the lake, we could start to smell the smoke, and my nose and eyes began to water a bit. 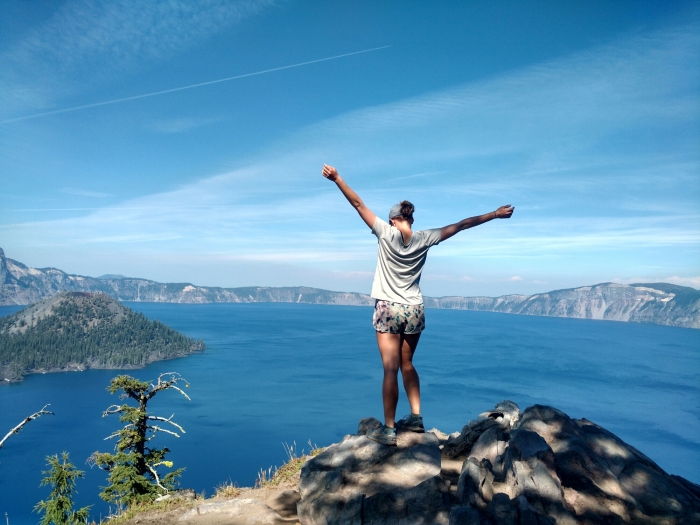 At one point, we could see a bunch of smoke plumes rising out the forest to the west, around where the PCT probably was. There was also still a fair amount of snow up around the rim, but thankfully none of the trail was covered. We got our last views of the lake before the trail cut away from the rim, but the scenery was still pretty nice. Eventually, we reached a massive tent site, with tons of tents hidden amongst the trees. Some of the other hikers that were at Fish Lake with us are also here, and also a bunch of weekenders with car camping tents and jeans. It was a bit of late evening, so we quickly ate dinner and got into bed. I’m so glad that we didn’t end up having to miss Crater Lake. It was totally beautiful, and will definitely end up being a highlight of the Oregon section of the trail.