Glowworm in Trail Journals, Trip Journals September 2, 2019September 2, 2019 1,186 Words
Liberty Springs Trailhead – Garfield Ridge Campsite
10.2 miles
Today was a crazy and amazing day. We slept in a bit because the people who run the motel were going to drive us back to the trail at 8:30. We got all of our stuff packed up, and then went back across the street to Wayne’s Market where we got some absolutely delicious breakfast sandwiches and some pastries. The drive to the trailhead and was quick and we were soon hiking again.
The day started off right away with a big climb up to Mount Liberty and the Franconia Ridge Trail. 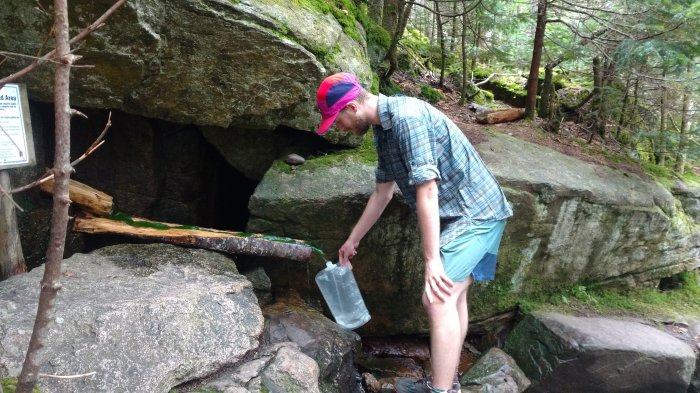 Reminded us of the piped springs on the PCT!

At first, the trail was incredibly smooth and the climb gradual. We almost thought we couldn’t possibly be on the AT, it was so nice. But before long we came around the corner and saw the jumble of boulders to start climbing up. I knew it was too good to be true. The climb actually wasn’t all that bad though. We were climbing steeply up a rock staircase for quite a while, but it was wonderfully non technical and I felt reasonably strong going up. 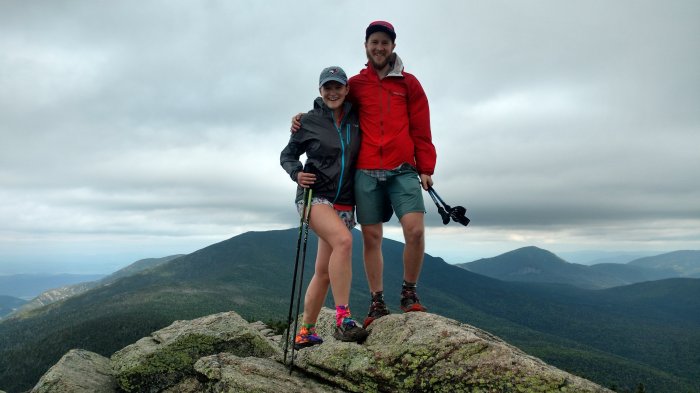 At the top, we dropped our packs at the trail junction for the Mount Liberty summit and made our way up to the top. The view was pretty amazing. We could see town, and Franconia Ridge and the summit of Mount Lafayette in the distance. There were grey clouds in the sky that had consumed the top of Mount Lafayette, which was slightly concerning, but we pressed on.

The trail was pretty chill for a while as we wound along the ridge below treeline. There was a steep climb up Little Haystack Mountain, with a sign saying we were entering the “alpine zone”, and then things started to get crazy. We came out above treeline on top of the mountain to a world of white fog and whipping cold winds. We couldn’t see a thing, other than the thick clouds whipping up and over the ridge. There was nothing to do but press on, despite feeling intensely disappointed about the lack of view.

We continued climbing up to Mount Lincoln. The winds continued to whip fast and cold. I felt super badass climbing mountains above treeline in a white out and intense winds, but I was still super sad that we couldn’t see anything. I’ve been wanting to come hike in New Hampshire for years specifically to see Franconia Ridge, and here we finally were, and there was nothing to see.

We were somewhere between Mount Lincoln and Mount Lafayette when some of the cloud suddenly lifted, providing a partial view. My heart leapt. Something was certainly better than nothing. As we continued the descent from Lincoln, more and more of the cloud blew off, and we could finally see the rolling mountain peaks all around us. Eventually the cloud broke completely, giving us a view of the Lafayette summit above us wreathed in blue sky and showered in sunlight. It was glorious. It was heaven.

We quickly made the climb up to the Lafayette summit, hoping to make it up before it clouded over again. The views had been continuously shifting as clouds blew up and over the mountain. At the top, we ended up having a great view, and all was well in the world. I got to see Franconia Ridge, with a little excitement thrown in to boot. Plus, on our way off the ridge we found a wild blueberry bush and briefly feasted to our hearts content. Life was good.

The descent off of the ridge was quite steep and a bit technical, but after the other things we’ve been through on this trail, it was nothing we couldn’t handle. It was a bit disheartening though to keep descending while watching the height of Mount Garfield rising above us, knowing we’d soon have to climb it.

The climb up Garfield was pretty steep, but not crazy technical, and was honestly the strongest I’ve felt on a climb this whole trip. I felt like I could just keep climbing that boulder staircase forever. Okay not really, but I felt good and it didn’t seem to tire me out too much. We got an absolutely amazing view at the top of Garfield, where we got to look back at everywhere we’d been today. It was crazy to see the distance we had covered in a single day. I kind of felt like I had super powers. 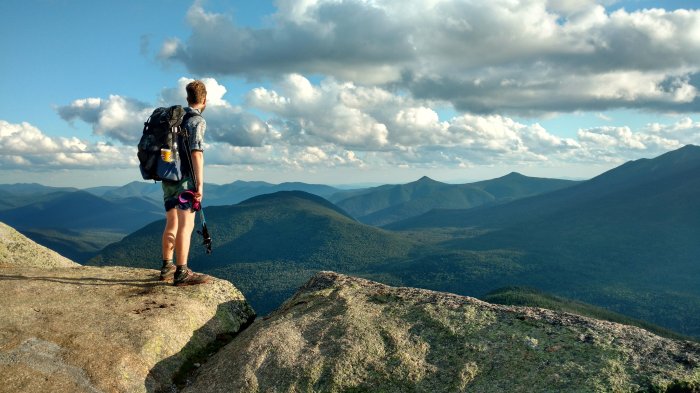 Gummies on top of Mount Garfield

Of course, we immediately had to descend 0.3 miles on steep boulder trail to get to camp. I think the most frustrating thing about this trail is knowing you’re so close to something, but the progress being so painfully slow due to the level of difficulty. It felt like it took way too long to descend to the spur trail to the campsite. And then, when we finally got there, the spur trail to the campsite went steeply back up the mountain we had just descended. I wanted to scream with frustration.

We’re camping at an official AMC campsite tonight, which means it’s staffed with a caretaker, we have to each pay 10 dollars to camp, and worst of all, we have to pitch our tent on a wooden tent platform. I don’t know why anyone ever thought wooden tent platforms were a good idea. Tents need to be staked down, or else they’ll fly away at the slightest wind. On top of that, many long distance hikers use non-freestanding tents, which need to be staked out to even stand up. Luckily, our new tent has a possible freestanding set up, but it’s kind of sketchy and I still prefer to use the non-freestanding setup whenever possible. The campsite is also so crowded that we’ve had to squish 4 tents on to each small tent pad, so you might as well be sharing a tent with your neighbours. We unknowingly set up our tent right beside a family with kids, and they’ve been pretty loud this evening, after the rest of the campsite had settled down for the night. I think we might try harder to find stealth sites to camp at from now on, to avoid pitching on overcrowded tent platforms.
It was nice to camp with the other long distance hikers again though. A lot of our bubble are here, including Tadpole, Survivor, Super, Double Orca, Tails, and Sock Ninja. We had a really nice dinner with Double Orca and Short Shorts, with lots of talking and laughter. It will definitely be sad to miss out on the socialization if we do start stealth camping. But very good for getting a good night’s rest and our wallets.
All in all, today has been an awesome day. I feel like we finally got our first taste of what I was expecting the White Mountains to be like. I’m intrigued to see what the next couple of days will bring, as we tackle the Presidential Range.